Marquez: Attempt at passing Rossi was nothing "crazy" 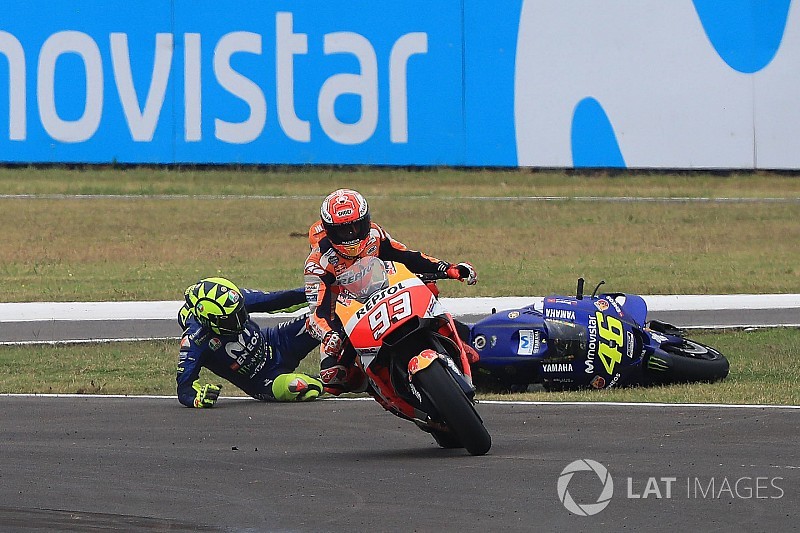 Marc Marquez insists he wasn't doing anything "crazy" when he made contact with Valentino Rossi during MotoGP's Argentine Grand Prix and caused the Italian to crash.

After receiving a ride-through penalty early on, Marquez spent the bulk of the Termas de Rio Hondo race recovering from the back of the grid.

The Honda rider made a forceful move on Aleix Espargaro at Turn 13, making contact with the Aprilia rider, and he did the same with Rossi later on at the same corner.

In Rossi's case, the Yamaha rider ended up falling off his bike and Marquez was subject to widespread criticism regarding his aggressive riding.

However, Marquez reckons he "didn't make anything crazy" during his battle with Rossi, highlighting that the same thing happened between other riders during the race.

"I think I didn't make anything crazy," said Marquez, who finished fifth but was given a 30-second time penalty and was classified out of the points in 18th.

"Today what happened to Valentino was a mistake, consequence of the track condition because I locked the front.

"You needed to understand how was the track condition, of course in that line was dry but I take wet patch, lock the front, release the brakes.

"Okay, I had the contact, I try to turn and then when I see that he crash I just try to say sorry.

"If you check, [Johann] Zarco with Dani [Pedrosa], [Danilo] Petrucci with Aleix [Espargaro]. Today was quite difficult but it doesn't matter; I did my 100 percent and of course [it was a] tricky Sunday."

On the other hand, Marquez admitted his biggest mistake was the incident with Espargaro, for which his penalty was giving up a position during the race.

"Maybe the biggest mistake what I did in the race was with Aleix," he said.

"Okay I receive penalty, I understand, I just go back one position but even two because I didn't know, and to be safe I go back two positions."

Miller tried to “keep emotions in check” amid grid chaos