Marc Marquez says Valentino Rossi’s appeal bringing MotoGP to a mainstream audience is “something unrepeatable”, as the Italian prepares for his final race on home soil.

Rossi will call time on his illustrious MotoGP career at the end of the 2021 season, and will end it having tallied up nine grand prix world titles – seven of which coming in the premier class – and 115 victories.

As well as the on-track success, Rossi helped push MotoGP and motorcycle racing in general into a mainstream audience with his appeal.

Rossi will make his final MotoGP appearance on home soil at Misano in this weekend’s Emilia Romagna Grand Prix, but arch-rival Marquez is convinced grandstands in 2022 will continue to be bathed in yellow #46 merchandise.

“Valentino, his sporting career and what he has done for MotoGP is something unique and will always be unique,” Marquez said on Friday at Misano. “It is not within anyone’s reach to repeat anything similar.

“He was the first to win a lot and he has done a lot for motorcycling, but above all he has attracted a huge number of fans to the sport.

“And that is something unrepeatable and for which MotoGP should be grateful to him.” 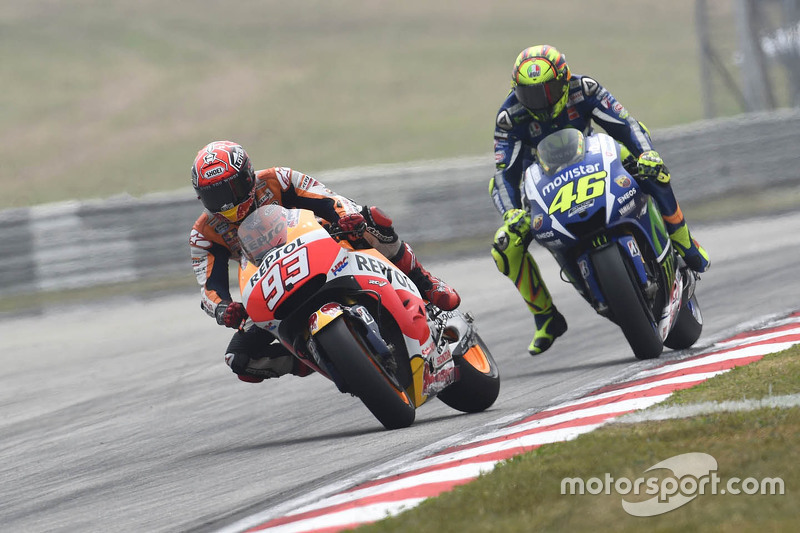 Marquez and Rossi had a major falling out during the 2015 season after the latter accused Marquez of conspiring with Jorge Lorenzo to sabotage the Italian’s title hopes.

That came to a head at Sepang when the pair collided, for which Rossi was forced to start the Valencia finale from the back of the grid and would ultimately lose the championship to Yamaha team-mate Lorenzo.

Tensions looked to have eased after Rossi beat Marquez in a thrilling 2016 Barcelona duel on the same weekend Moto2 race Luis Salom died in a practice incident, with Rossi and Marquez sharing an embrace for the first time since their 2015 fallout.

But the rivalry boiled over again in 2018 when Marquez, recovering from a ride-through penalty for an incorrect start procedure in Argentina, collided with Rossi – sparking a war of words between the pair again.

In interviews this year, Rossi maintains he was robbed of the title in 2015 and continues to blame Marquez for that.

Commenting on their current relationship, Marquez said: “My relationship with him is not good, but I have no problem recognising how important he has been to the sport and admitting the reality.

“In recent years we have no longer been direct rivals and it doesn't depend on me if the relationship changes, [it’s] something that doesn't matter much to me either.”