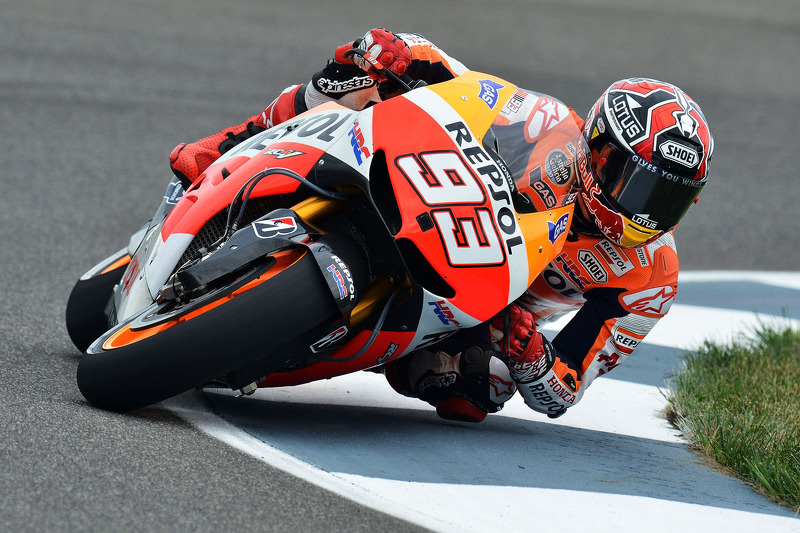 Marc Marquez crafted a perfect race win at today’s bwin Grand Prix České republiky at the Brno circuit with the Repsol Honda rider stealing victory from Jorge Lorenzo who led for the majority of the 22 lap race on the Yamaha Factory Racing machine while Dani Pedrosa also got the better of Lorenzo in the final few laps of the race. Marquez was ecstatic as he crossed the line marking his fifth win of his rookie MotoGP campaign.

I'm so happy! Before we came here I didn't expected to win.

Lorenzo got a perfect start from the second row and immediately set about building his lead over the Repsol Honda pair with Marquez slotting into second while pole position man Cal Crutchlow was in 4th early on for the Monster Yamaha Tech 3 team. Alvaro Bautista was completely outsmarted from his second position and was pushed back to 5th with Valentino Rossi in 6th on his Yamaha Factory Racing YZR-M1 and Bradley Smith on the Monster Yamaha Tech 3 machine. Stefan Bradl didn’t get a brilliant start and the LCR Honda rider was quickly left on his own in 7th place with the Ducati Team riders Andrea Dovizioso and Nicky Hayden in 8th and 9th.

Positions remained static for the first third of the race with the only move coming from Bautista on Crutchlow for 4th place but the British rider wasn’t going to give up on chasing the leading pack and he was quickly back in front of Bautista with Rossi now close behind. Smith got unlucky early on when he crashed out while there was also bad luck for NGM Mobile Forward Racing’s Claudio Corti who was tagged from behind by Avintia Blusens rider Hector Barbera who seemed to miss his braking point and both riders retired from the race. Lukas Pesek also had a bad day with the Came IodaRacing Project rider crashing out at his home race.

Moving in to the second half of the race disaster struck for Crutchlow who crashed out after getting away from Bautista and Rossi but he was able to remount and get back on track way down the field and out of the points. Marquez started to eat into Lorenzo’s lead with Pedrosa in tow with both the factory Honda men looking to have better acceleration to that of Lorenzo while his teammate Rossi was able to get ahead of Bautista. The threat of rain was also present in the final third of the race with white flags waving informing the riders of their right to pit and change bikes if they wanted. However, the rain never came and none of the riders needed to pit.

Marquez and Pedrosa were now looking for a way to the front of the battle and just as they entered into the 6th last lap Marquez attempted to get in front with a huge lunge into turn 3 but his move was cut off by Lorenzo on the inside. Marquez continued to push and within another lap the ultra fast rookie was past Lorenzo and immediately stretched out a .5s lead while Pedrosa was also pressuring Lorenzo who hadn’t got an answer for the late race pace of the RC213s. Lorenzo tried his best to get back into the lead with a brave pass on the final corner but Marquez went straight past him again in the next lap. There was also excitement behind the three front men with Rossi and Bautista battling it out for 4th with Rossi finally getting the advantage.

The final three laps saw Marquez on his own and streaking across the finish line for another win while Pedrosa was determined to pass Lorenzo and he did so to make it a Honda one two at the front while the crowd were also cheering for Rossi who managed to stay ahead of Bautista. Bradl was promoted to 6th place following Crutchlow’s crash with the British rider finishing his race in 17th. The final spots in the top ten went to Dovizioso who stayed ahead of teammate Hayden with Andrea Iannone finishing in 9th for the Energy TI Pramac Racing team and the CRT battle was won by Aleix Espargaro for the Power Electronics Aspar team.

Securing his fourth win in a row, something no other rookie has done, Marquez was beaming in his post race conference saying, “I'm so happy! Before we came here I didn't expected to win, because Jorge and Valentino had both tested at Brno recently and Dani is always so fast here and won the race last year. It is a completely different track to those at which we have raced before, and these 25 points feel different to Indianapolis! This was a very hard fought win and I enjoyed myself a lot. The battle with Jorge was really good and we are pleased with the victory. Thanks to all the team!"

Pedrosa was very satisfied with his second place finish with the Spaniard still recovering from his shoulder injury. He said, “I am very happy with the result, generally speaking, because after all the problems with my injury and the doubts we've had at the last few races, we took a big step forward with my mental preparation today. We were more ready to win here, despite not being 100%. Unfortunately, our strategy was not the best. I had problems overtaking throughout the race, because I couldn't brake late and was always the third rider in the trio at the front.

I think that I made my final attack one lap too late. If I had passed Jorge one lap earlier, maybe I would have been in with a chance of the victory. In any case, we had the right attitude of attacking until the end and gaining ground on Marc. I just needed another lap in order to catch him! We will try again next time. I want to thank the team for the great job that they did this weekend,” Pedrosa added. Leading the race for over 16 laps, Lorenzo said he didn’t have enough in reserve when the two Repsol Honda’s came passed. He said, “I think I did my best start in all my career in MotoGP, I took four positions and in the first laps I was really quick. Finally I couldn’t keep the same distance to second place so little by little they caught me. Especially under braking and on the straights they were faster than me so I couldn't do much more.

I was a little nervous when the white flag came out because it’s really dangerous to race with slick tyres on little spots of rain but luckily it didn't come so we could finish in dry conditions. Finally when Dani overtook me it was too far to fight back, I didn't have the rear tire or physical condition after pushing a lot all the race. The Championship is not lost yet but it’s now getting very difficult. We need just a few tenths to win the race so we have to pray for that at Silverstone!” Lorenzo added.