Marc Marquez says the fact he's crashed fewer times in 2019 compared to previous MotoGP seasons is related to aspects of the current Honda bike and his mental state.

Five-time premier class champion Marquez crashed no fewer than 23 times across the course of the 2018 campaign, giving him the highest total of any MotoGP rider - six more than Cal Crutchlow and Jack Miller, who both fell 17 times.

In 2017, he likewise led the way on 27 crashes, three more than second-placed Crutchlow.

However, with nine of this year's 19 races down, Marquez is on course for a much lower tally, having only crashed six times and only once in a race, while he was leading at the Circuit of the Americas.

Although the 2019-spec Honda has proven trickier to ride than its predecessor, Marquez said that its more powerful engine and different characteristics are helping him stay on the bike.

"Looks like this year about the chassis, maybe we are losing in some points but we are gaining on another point. It was my critical point and we gained there," he explained.

"Also looks like we have more engine [power], so more [power] allows us to be a little bit safer in the braking area."

Marquez also said that being "concentrated" is helping him to save more moments which in previous years could have translated into crashes.

He cited the post-race Barcelona test in June, where he suffered a crash at Turn 4, as an example of what happens when he isn't fully focused.

He said: "If you are very concentrated on the bike, you can save many crashes. I crash less [this year], but if you count how many saves I did… for that reason I crash less, but I save more. You need to be so concentrated.

"For example in the Montmelo test, I was not 100 percent concentrated, just lost the front and I crashed, because I was not focused enough. This is the way to ride the Honda, to find the limit and to be fastest."

Excluding Austin, Marquez has finished first or second in every race so far this year, giving him a mammoth 58-point championship lead over Andrea Dovizioso.

"Experience, the atmosphere in the team, all these things help," said the Spaniard when asked to elaborate on why he's able to be more focused in 2019.

"It doesn’t mean last year or two years ago I was not concentrated, but when you have more experience and you understand it’s not necessary [to be] at 100 percent in every practice, or every lap of the practice, this helps a lot." 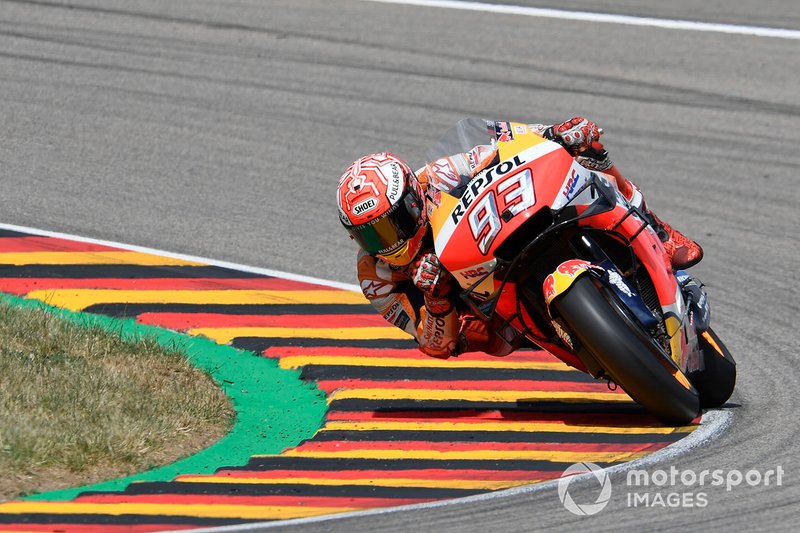