Marquez had to have eyes cleaned after massive Silverstone MotoGP crash

Honda’s Marc Marquez says he had to go to hospital to have his eyes cleaned following his massive FP1 crash on Friday at the MotoGP British Grand Prix.

Marquez tucked the front-end of his RC213V as he tipped into the fast Maggotts left-hander right at the end of FP1, the Honda rider crashing at 274km/h.

Both he and his bike barrel rolled through the grass before coming to a halt, with his Honda left stricken in the middle of the circuit and necessitating a red flag.

Marquez topped FP1 and returned to track for FP2, ending Friday fifth overall, but revealed he battled issues with sand in his eyes from his crash.

“So, today I felt really good from the beginning,” Marquez said in a statement issued by Honda.

“I already said that this week I feel good, with energy, and today I went out and I felt really, really good on the bike and riding like I want. 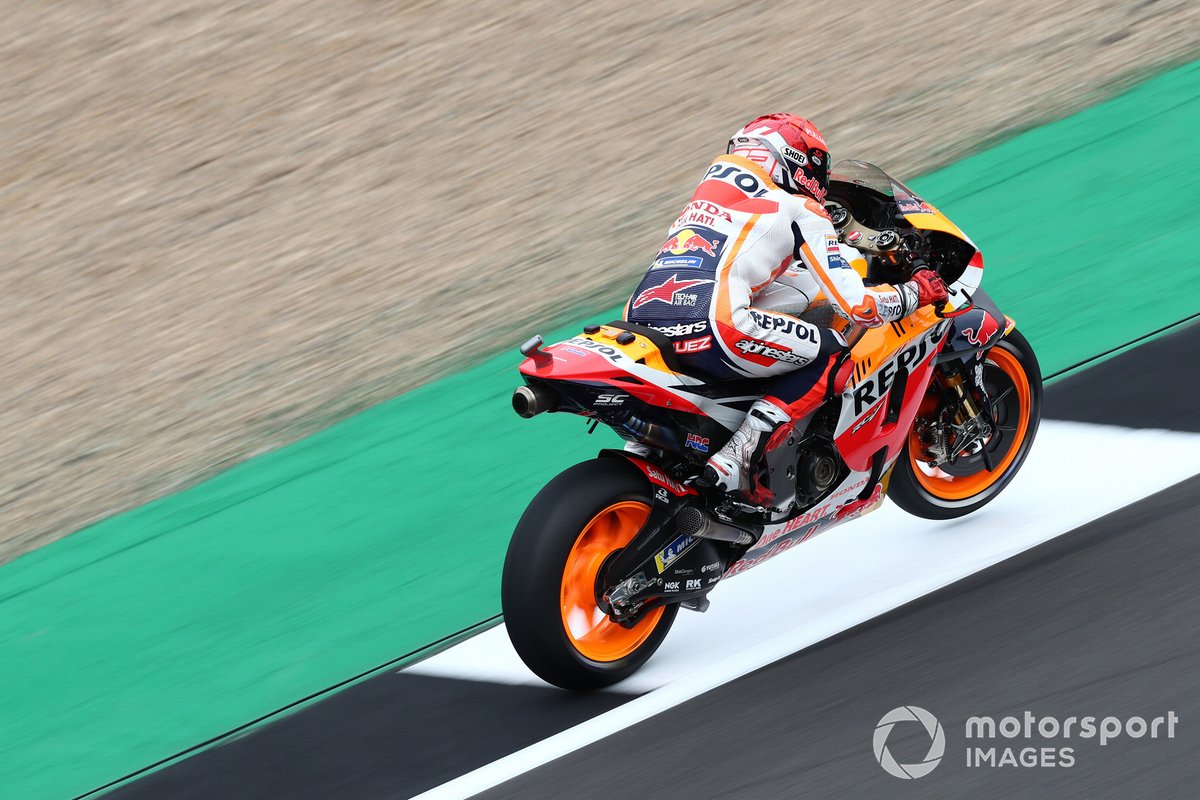 “It’s true that unfortunately at the end of FP1 I had a big crash and in that crash I had some sand inside my eye.

“This created [a situation where] I was crying a lot during FP2, and it was difficult to concentrate well and to perform in the best way.

“But even like this we did a good FP2, but then after FP2 I just started to feel worse with the eye.

“Always the vision is ok, but there was some sand, so I went to the hospital, they cleaned everything.

“They said tomorrow everything should be ok, but just I need to rest this afternoon, try to be with the eye closed.

“[I’m] happy because we started well the Silverstone GP and let’s see if we can keep this level until Sunday.”

Marquez did not speak to the media in his usual post-session debrief.

Overall, it was a strong day for both factory Honda riders, with team-mate Pol Espargaro enjoying one of his best days on the bike in fourth on the combined time sheets.

The Spaniard pinned his form on the colder temperatures mixed with the relatively new Silverstone asphalt offering him the grip he has been missing all year on the Honda.

“I mean, the temperature was low, which gives you more grip with the soft tyres and you have generally more grip,” Espargaro explained.

“It happened exactly the same at Le Mans, the temperature was very similar, the track was resurfaced, and these conditions help me.

“The more grip I have, in other factories, for most of my teammates it was always a big problem and they didn’t know how to manage this grip, but for me it was a huge advantage.

“But for me, with good grip I can manage.

“This means that for sure the low grip, you have more chances to have it, there are more places with hot conditions than cold conditions.

“There are more places with bad asphalt than with good asphalt, so that’s why I struggle more especially this year with our problems with rear grip.