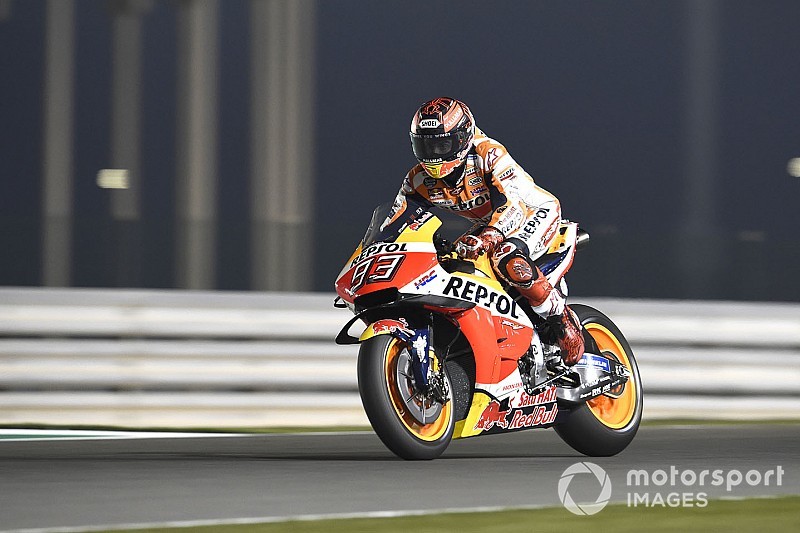 Marc Marquez feels that Ducati and Yamaha are both "far" ahead of Honda after the opening day of MotoGP pre-season testing in Qatar.

Honda had a quiet start to the Qatar test with LCR rider Takaaki Nakagami leading the manufacturer in eighth and the factory duo of Marquez and Jorge Lorenzo only taking 10th and 21st.

In contrast to that, all factory Ducati and Yamaha riders were in the top five as Maverick Vinales topped the timesheets for the latter.

Marquez admitted that Qatar is usually a tough track for Honda, but feels that the team also doesn't yet have the right set-up.

"We had some issues on the set-up, we need to work there to understand because Ducati and Yamaha riders are far from us," said Marquez, who also suffered a crash during the day.

"It is true that in this circuit normally we struggle, it is true that we have two days more in front, but we need to work in a different way to be closer to them.

"Still we need to work, understand many things. We start here with the Sepang set-up and looks like it is not working here.

"We didn't have time to change because it is only three hours in the correct time to test so we did not have time change everything."

Marquez was however happy with the recovery of his shoulder, saying that he now could ride in his own style.

"Now I am riding in normal way, more in my style. In Malaysia I was very smooth. Now I have more power, still not the one that I have last year but coming closer.

"Compared to Malaysia test, we did a huge step. In some areas still feel some pain but the power is there so this is important."

Marquez added that while he won't be fully fit for the Qatar season opener, he doesn't expect his rivals to start with an advantage because of his injury.

"I can say that about physical condition they will not have advantage.

"Then we will see, now today I feel better in physical conditions but I am far in laptime. In two weeks I think maybe not 100 percent, but close to 100."