Marquez: Dovizioso is the rider to beat at Brno 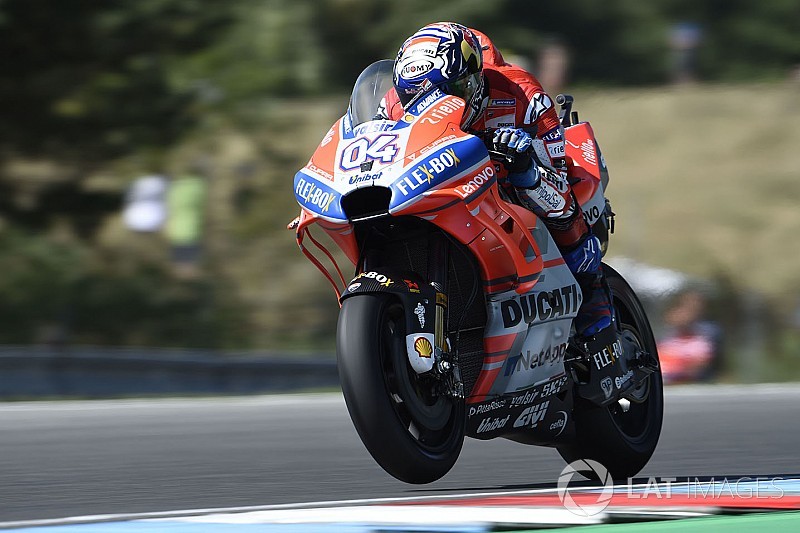 MotoGP championship leader Marc Marquez says rival Andrea Dovizioso is the rider to beat at Brno on the evidence of Friday practice.

Dovizioso and Marquez were the only two riders to place in the top 10 in the combined Friday classification without using a fresh soft rear tyre in FP2.

And Marquez suggested after track action that the Ducati rider was a step ahead, while he and his practice-topping Honda teammate Dani Pedrosa were among his nearest rivals on pace.

“At the moment I think the fastest guy on the track is Dovizioso,” Marquez said. “Then it's Dani, me and two, three more riders with a very similar pace.”

Dovizioso himself was buoyed by his Friday showing, as he admitted he and the Desmosedici GP18 were performing above expectations at a track that hasn't yielded a Ducati MotoGP podium since 2010.

“It was really good, a bit better than what we expected, our speed is pretty good,” he said. “That is the best you can have the first day because [it] gives you the chance to make more laps on the tyres and you are able to work a lot for the race.

“We didn't put the soft tyre at the end like Marc, and we are in the top 10, that is very important and positive. We showed real speed with used and with new tyres so [I'm] pretty happy.

“Doesn't mean it will be enough because the consumption on the tyre is the biggest point, so we are working a lot on that.”

While Dovizioso is comfortably inside the provisional cut-off for an automatic Q2 spot, Marquez is in by less than a hundredth ahead of FP3.

The Spaniard, who has forgone a qualifying simulation run on Friday on a number of weekends this year, says he's been taking cues from Dovizioso in that regard.

He admits, however, that it is a “risky” approach, and one which played a part in Marquez having to fight through Q1 in Barcelona earlier this year.

“Of course I would like today to go to sleep with the fastest lap, or try to be on the top, but I understand this [approach], last year especially, because this was the strategy from Dovizioso as well - [to] work for the race,” Marquez said.

“It's true that tomorrow to be on the Q2 directly you have one chance. And for that reason, [it] is sometimes more risky, like happened to me in Montmelo [Barcelona].”