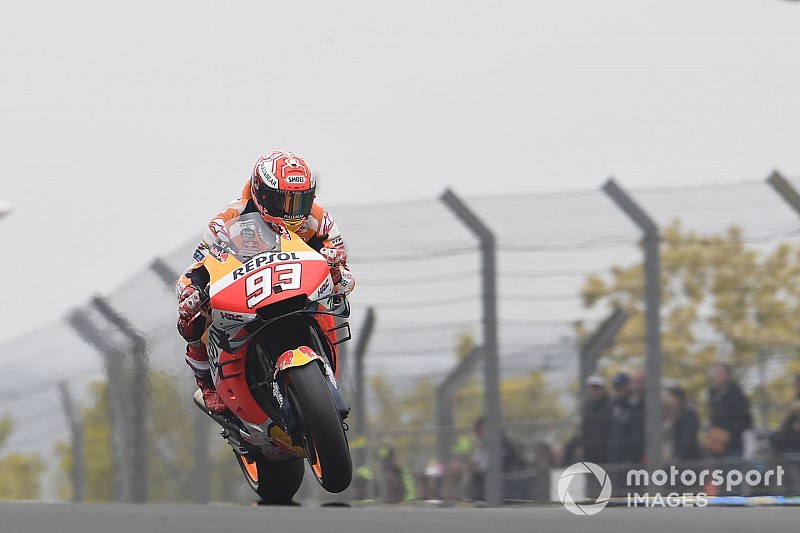 Marc Marquez says the 2019 Honda MotoGP bike allows him to be more versatile than on last year's version, as he can now use “two or three different riding styles”.

While fellow Honda riders Jorge Lorenzo and Cal Crutchlow have encountered difficulties with the 2019 specification, which Crutchlow described as “nothing like” its predecessor, Marquez has prospered.

The Spaniard has dominated three races of the first five, and was firmly in contention for victory in the other two, which leaves him as favourite to claim a fourth successive premier-class crown.

Speaking after the most recent race in Le Mans, in which he ran the soft front tyre that Honda has tended to ignore, and eased to victory, Marquez explained that he feels he now has more strategies at his disposal.

“Normally when it's cold we struggle. It's the first time that we race with the soft tyre in the front, but this year we're able to ride in two-three different ways,” he explained.

“I can find the laptime in a different way than last year and this is the most important, and then I'm able to use different tyres and different riding style.”

Marquez attributed this to the gains Honda has made in terms of engine power over the off-season, saying this allows him to emulate the way Lorenzo and then-teammate Andrea Dovizioso rode the 2019 Ducati.

“Still a few things there to improve, but the way I say I can use two or three different riding styles, it's because I have more engine. And when you have more engine, then I understand the way to ride last year of Dovi and Jorge.

“Last year I was very strong in the qualy, maybe now I'm a little bit less strong on the qualy but I'm stronger on the race pace.”

LCR rider Crutchlow claimed on the eve of the season that Honda's off-season engine gains may have come at the expense of front-end stability, thus robbing the RC213V's of its “greatest weapon” that allowed its riders to make the difference under braking.

For Marquez, however, this has been a worthwhile trade-off.

“The bike is turning better. Last year we just try to find the right time on the brake point – this year maybe we lose a little bit brake point, but we gain on other areas.

“And this is the way, because always brake point means risk, and risk means difficult to be constant. Now we are able to play in a different way on the brake point and find the laptime in another area.”