Marquez breaks the two-minute mark on second day of testing

Marc Marquez continued his customary trailblazing form during the second day of MotoGP pre-season testing at the Sepang International Circuit today with the Repsol Honda rider the only one to break the two minute mark with his teammate Dani Pedrosa in second and LCR Honda’s Stefan Bradl in third. There was also another surprise in store when NGM Mobile Forward Racing’s Aleix Espargaro finished the day in fifth on his open class Yamaha.

With Pedrosa leading the way for the majority of the morning session, Marquez smashed through the 2 minute mark in the afternoon setting the fastest time of 1m 59.926s to his teammate’s second fastest lap of 2m 00.336s. Bradl wasn’t too far off with a 2m 00.339s lap and Yamaha Factory Racing’s Valentino Rossi was also lapping in the low 2 minute bracket with the seven time MotoGP champion sitting in fourth place today with a best time of 2m 00.464s. 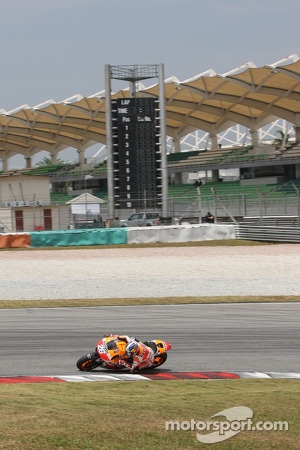 The second biggest talking point of the day will surely be the ever improving times of Espargaro who continues to lap at a rapid pace on the Open class Yamaha and last year’s top CRT rider eventually settled for 5th spot with a best lap of 2m 00.547s. With the new Open class machines allowed to carry a maximum of 24 litres of race fuel compared to their factory counterparts’ 20, it is currently unclear what load the open class riders are carrying in their machines during the test sessions.

Ducati test rider Michele Pirro followed in 13th behind Dovizioso and Crutchlow while Nicky Hayden was the next Open class rider on the timing sheets with the Drive M7 Aspar rider in 14th and close behind was his American compatriot Colin Edwards on the NGM Mobile Forward Racing machine. Energy TI Pramac Racing’s Yonny Hernandez finished in 16th place with the HRC Test rider Kosuke Akiyoshi next along and Hiroshi Aoyama close behind in 18th on the second of the Drive M7 Aspar machines. 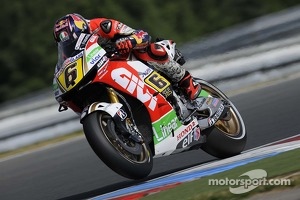 Katsuyuki Nakasuga ended the day in 19th with the Yamaha test rider hard at work testing a number of settings on the M1, as was Randy De Puniet with the Suzuki team who are preparing to return to MotoGP in 2015. Scott Redding finished just outside the top 20 on the GO&Fun Honda Gresini machine with Paul Bird Motorsports rider Michael Laverty finishing ahead of Hector Barbera (Avintia Racing) while Broc Parkes (Paul Bird Motorsport) got the better of Karel Abraham (Cardion AB Motoracing) and Mike Di Meglio on the second Avintia Racing machine.
shares
comments