Ducati rider Jorge Lorenzo says his injuries felt “worse than expected” in Friday practice ahead of his final MotoGP race with the manufacturer in Valencia.

Lorenzo fractured his left wrist in a big shunt in Thailand practice and has spent the four grands prix since on the sidelines, but entered the Valencia weekend confident of racing.

The three-time world champion was 19th in the combined classification on Friday, two seconds off the pace, and admitted after the day's running that it had been a challenge.

“Honestly [the condition is] a little bit worse than I expected yesterday,” Lorenzo said.

“It's not the same to do a normal [day-to-day] life, but you don't feel so much pain, even if I don't have full mobility.”

“But another thing is the pressure, the heaviness of the MotoGP bike, especially on braking. It's a lot, and still the injury is not healed completely.

“I'm much better than in Sepang, probably rain condition help me, because on the rain you have more or less half of the pressure you got on the dry.

“But for the negative part is more easy to crash, so with not completely healed injuries... the idea to crash is not very welcome at the moment.”

Lorenzo, who signed for Honda for 2019-'20, is set for his first test with the Japanese bike next week, but stressed this had no bearing on his approach to the weekend.

“I'm worried about myself, about my physical condition. I know the injuries aren't healed completely.

“If in normal conditions you go into the rain, [you are] much more careful than on the dry because you don't want to crash - when you don't feel completely strong and completely well, you are even a little bit more [careful].

“Doesn't depend if it's the last race with Ducati. This is an subconscious thing.” 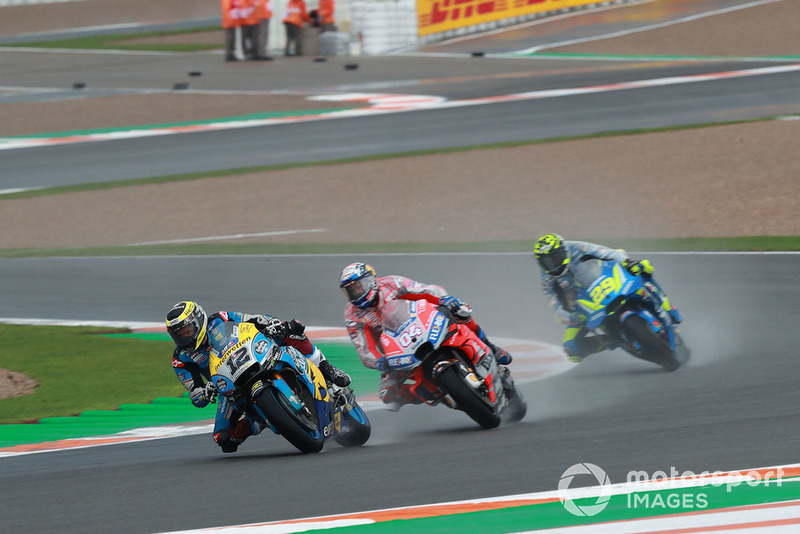 Works teammate Andrea Dovizioso ended the day in fourth place, but was not satisfied with his GP18 bike with the rain.

“Today the feeling was quite bad on the bike. And the same feeling I had this morning and in the afternoon, when the water [level] was different,” he said.

“The feeling was very bad, strange, because we expect a better speed.

“I didn't have enough feeling on the rear, to release the brake and make the speed in the middle of the corners.

“This season we didn't ride the bike on the wet a lot. And in this season we change quite a bit the bike, the balance of the bike.

“So we have to understand, study, because normally in the past in any tracks our level on the wet, from the beginning [of the weekend], was good.

“Didn't happen today but I'm not too worried, I think we have to analyse, study and make some change.”