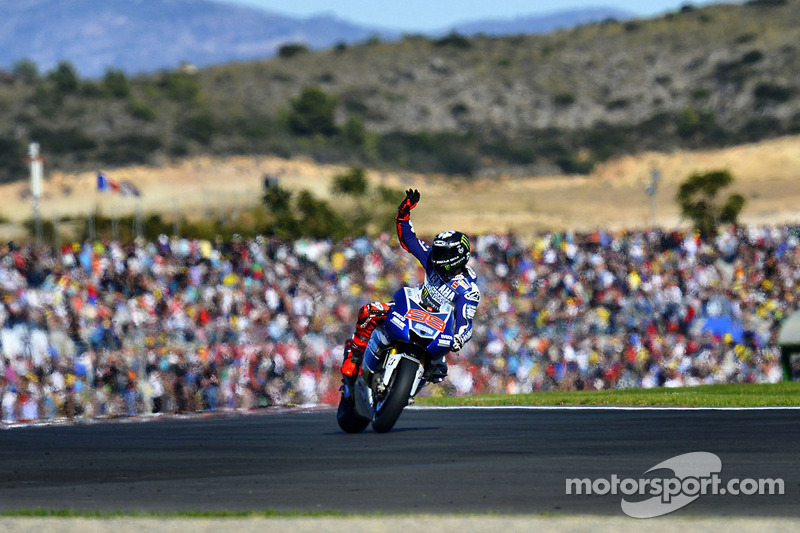 Trailing leader Marc Marquez by 13 points going into the race, Lorenzo had nothing to lose and everything to gain.

Yamaha Factory Racing’s Jorge Lorenzo wrapped up the 2013 MotoGP season today with victory in the Gran Premio Generali de la Comunitat Valenciana, his third consecutive victory of the season. Trailing leader Marc Marquez by 13 points going into the race, Lorenzo had nothing to lose and everything to gain as the Spanish showdown unfolded in front of a record crowd of 104,000 race fans at the Ricardo Tormo circuit. 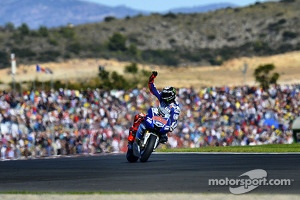 Taking off past Marquez from second on the grid, the 2012 world champion took the holeshot and control of the race. Lorenzo kept the pace down on the opening laps, hoping to bring the chasing pack into play to challenge Marquez.

The daring strategy allowed Dani Pedrosa to attack, the two rivals entering an intense battle over several laps as they swapped positions countless times in a stunning display of riding skill at the limit. Pedrosa was to end up the loser in the exchange as the two touched going into turn two with 21 laps to go. Pedrosa ran wide, losing position as he rejoined the race.

The incident allowed Marquez to briefly pass Lorenzo for the lead but he was only allowed to stay ahead for a lap before Lorenzo reclaimed the front on lap 11, putting the hammer down to reel off a number of 1’31 second laps as he flew to his eighth win of the season.

Teammate Valentino Rossi moved up to fourth off the line after a good start, chasing Marquez into the first corner with Alvaro Bautista in hot pursuit behind. As the race unwound Bautista was able to make a pass on Rossi but with 19 laps to go the nine-time world champion showed his mastery of late braking, taking third position back from the Spanish rider. The provisional podium position was not to last as a recovering Pedrosa re-passed on his way to second, leaving Rossi to claim fourth at the line.

Despite dominating not just the last quarter of the season but the final race, it was not enough to overcome the points difference to Marquez, leaving Lorenzo to claim a worthy second place in the standings after an incredible season of unrivalled performances. Rossi’s eighth fourth place finish of the season was enough to secure him fourth in the final standings.

Jorge Lorenzo (1st | 46'10.302 | 30 Laps): “I slowed the start of the race a little but I think it didn't work out because the other riders, Bautista, Valentino, Crutchlow and the others needed some tenths more to stay there. I tried first and last to play a little bit with the race and I managed it quite well but I couldn't stay there for too long.

When I looked behind I could see that Valentino was very far away so I thought that today it was better to concentrate on winning the race and waiting to see if Marc makes a mistake. Now we have to celebrate second in the standings which is a good place. We have to congratulate Marc because he really deserved the championship and we will make a party tonight!”

Valentino Rossi (4th | +10.579 | 30 Laps): “The race was not so bad, especially after this morning where I had a lot of problems and wasn't fast enough. Unfortunately I didn't have the pace to fight for the podium. I was able to stay close at the beginning and try to fight but after I didn't have the speed, like more or less all the season where I am two or three tenths slower compared to the top guys.

For this reason I couldn’t challenge for the pole position, the race and the championship. The season was not so bad for me but we have to try more to increase our speed and our performance to fight for the podium more constantly. This is the target for 2014."

Wilco Zeelenberg - Yamaha Factory Racing Team Manager: “It’s been a fantastic season and of course a great win today, it was an amazing show. The first ten lap tactics were to keep the pack together. Jorge did a great job, it was on the edge and that’s racing; all that counted today was the championship. Marc was clever and stayed calm, Jorge did his best at his maximum and he won the race but lost the championship. This loss is exceptional; he won eight races and broke his collarbone twice. It’s an incredible result to finish just four points from the title given the conditions. It is a great achievement and we are very proud about that.”

Massimo Meregalli - Yamaha Factory Racing Team Director: “It has been an incredible season. I think we deserved the championship, we really did the maximum that we could. I would like to say a big thank you to everybody, Jorge and the team. We never gave up and Jorge never gave up. He delivered some really impressive performances. Even today he made a fantastic race. He started the race having a plan and tried to manage the race until he understood that he couldn’t do any more.

Then when he decided to win he pulled away. The season has been really long, hard and tough but we are satisfied with all we did. I would like to thank everybody and wish all the best to team members Jeremy, Walter and "Bibo" who are leaving us. Tomorrow the new season is already starting with a three-day test. We will aim to give the Japanese engineers as much information as possible to work with.”

Smith seventh, Crutchlow falls in final round at Valencia