Championship leader gives himself best possible start ahead of rivals

Jorge Lorenzo streaked into pole position at the Twin Ring Motegi marking his 50th career pole with a performance that saw the Yamaha Factory Rider jumping three positions from 4th to 1st on the final lap ahead of his main championship rival Dani Pedrosa (Repsol Honda) who secured a second place start tomorrow while Monster Yamaha Tech 3 rider Cal Crutchlow once again starts from 3rd position on the grid.

I made it so I’m very happy.

The CRT battle was once again won by Spain’s Aleix Espargaro for the Power Electronics Team with a best lap of 1m 47.383s while his teammate Randy De Puniet starts one place behind in 14th on a best time of 1m 47.581s. Starting from 15th will be Cardion AB Motoracing’s Karel Abraham setting a best lap of 1m 47.791s with Colin Edwards securing 16th place on the grid for the NGM Forward Racing team on a best lap of 1m 48.125s with Yonny Hernandez in a 17th place start on a lap time of 1m 48.513s. 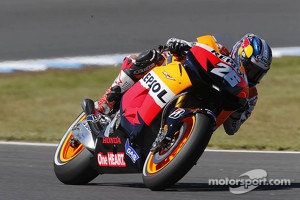 San Carlo Honda Gresini’s CRT rider Michele Pirro starts from 18th following a crash during the session and eventually the Italian set a best time of 1m 48.653s ahead of Danilo Petrucci for the Came IodaRacing team with a best lap of 1m 48.831s. James Ellison starts from 20th position for the Paul Bird Motorsport team on a best lap of 1m 49.023s with Roberto Rolfo starting from 21st tomorrow for the Speedmaster team setting a best lap of 1m 49.183s to start ahead of Ivan Silva in 22nd position (1m 49.831s).

Lorenzo was very happy with his 50th career pole and is looking forward to tomorrow’s race. He said, “I’ve been really fast all weekend with a very good pace but in qualifying, ten minutes to the end I thought I was making a very good lap but I was in sixth position! I didn’t understand how the other riders were going so fast. I needed to push a bit more in the second to last lap I made a mistake so in the last lap I had my last chance. I made it so I’m very happy but of course the important thing is the race tomorrow.”

Worried about chatter that he encountered during today’s session Pedrosa said, “In the end I didn't know the lap times of the others and I was just pushing as hard as I could to get a place on the front row of the grid because on my last exit I was eighth. I had many problems with chattering in qualifying and we still don't know why. Everything was OK during the free practices but this afternoon, it was hard to do the lap time. Finally the second place is good enough and I hope we can avoid this chattering in the race tomorrow. The key point will be to choose the correct rear tire and be consistent for the whole race because the pace will be fast.” 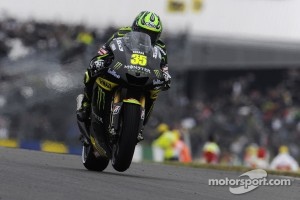 Crutchlow was delighted with another front row start saying, “I am really happy to be on the front row again and I have to say a big thanks to my Monster Yamaha Tech 3 crew because they did an amazing job to improve the bike from yesterday. In the first two practice sessions I was struggling just to make it inside the top 10 and today I was fighting for pole position, so my team did a great job. I'm actually a bit disappointed not to get my first pole position because I felt today was a good opportunity to get it. I was fast right from the start of the session and I felt much more confident with the hard rear tire, so that is a big bonus for the race.

To be honest though I am not sure whether to race the hard or the soft rear tire. I haven't made a final decision yet and maybe I'll have to flip a coin. The pleasing aspect today is that I am not only fast but I'm also consistent, so hopefully I'll be in the podium fight tomorrow, which would be a great way to start this busy period to the end of the Championship. It is great to see the YZR-M1 so competitive here in Japan, so hopefully all four of us can put on a good show for the Yamaha fans tomorrow,” Crutchlow added.

Fourth row for Barberà at the Twin Ring Motegi