Lorenzo: Rear-brake use key to progress with Ducati 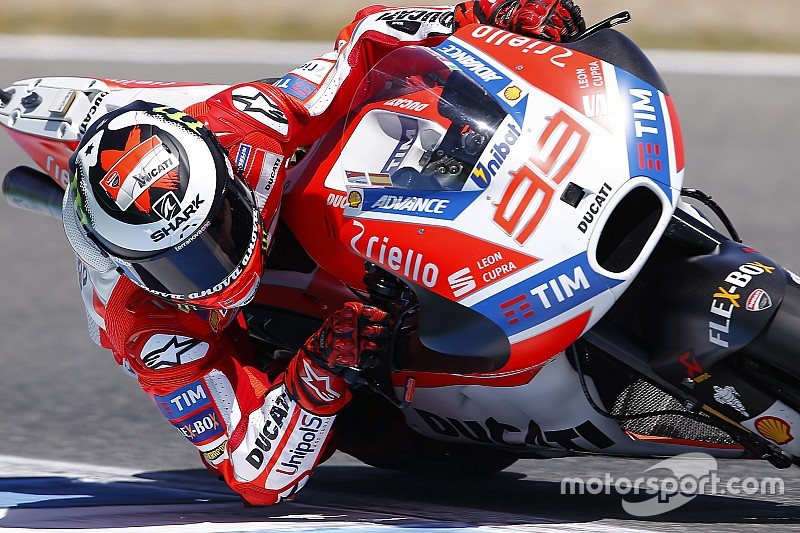 Jorge Lorenzo believes rear-brake use is proving pivotal to his improvements on Ducati's MotoGP bike, and will continue to do so.

The three-time MotoGP champion endured a tough start with Ducati after nine seasons with Yamaha, struggling to adapt and even admitting that a riding position error negated the value of winter testing.

Harnessing the Ducati's strength under braking has been one of Lorenzo's biggest lessons, which he feels is being conquered by adapting to using a thumb-operated rear brake.

"I started using the rear brake in Qatar," he said. "I wasn't used to it, I used it for not enough time in most of the brakings, now it's more natural for me and I'm using it more.

"This helps a little bit to stop the bike, to enter the corner a little bit sliding and more fluid. It's a little bit less physical, too. It's not completely natural for the moment, but it's getting there.

Lorenzo claimed his maiden Ducati podium at Jerez earlier this month, with third place in his fourth start that he said felt like a win.

That weekend was the Spaniard's most positive on the Desmosedici by a considerable margin, and he acknowledges that time on the bike is his main tool to improve and "flow more" on it.

"I keep making kilometres, I give a lot into learning how to stop the bike, especially with the rear brake and not struggle so much on braking - I'm getting better," he said.

"Sooner or later it will become natural for me to ride like this because I have had nine years without using the rear brake without the sliding in entry to the corners.

"On this bike I need to use it until probably the bike changes and maybe even if the bike is changing I will keep using it.

"So you always have to find a way to take the maximum of the bike, and every bike asks you [for a] different kind of way to be competitive."

Rossi: "No plans" to run MotoGP team yet