Lorenzo on top on day one of Sepang test

2012 MotoGP testing gets underway in Sepang

Jorge Lorenzo ended day one of the first MotoGP test of the year on top of the timing sheets after setting the only sub 2m 2s lap at the Sepang circuit in Malaysia and the 2010 World Champion showed no signs of discomfort on his bike following an accident late last season in which the Spaniard lost the top of his little finger.

Lorenzo finished the day ahead of Repsol Honda’s Dani Pedrosa who was flying the flag today after reigning World Champion Casey Stoner opted out of testing after aggravating a muscle in his pre-riding routine. Cal Crutchlow put in a solid performance and really seemed to gel with his new 1000cc Monster Yamaha Tech 3 machine to finish in third position at the end of the day.

The test was delayed due to early morning rain and it wasn’t until midday when the riders went onto the track with some of the test riders also taking part. The pace steadily rose throughout the day and nearing the end the times began to fall. Today also saw two CRT teams taking to the track with American Colin Edwards onboard his Forward Racing Suter-BMW machine and Spanish teammates Jordi Torres and Ivan Silva on their Avintia Racing FTR-Kawasakis.

Speaking after the session Lorenzo was very happy with his first outing on his new bike and best time of 2m 1.657s. “I’m very happy with today,” said the Spaniard who continued, “For the first ride on the bike in some time, it’s been very positive. Yamaha has worked very hard over the winter for this M1. I can see very easily where I have to adapt my riding style for the bike and I can see a lot of potential. We have many areas where we can improve so I’m looking forward to beginning again tomorrow. I’m also very happy that my finger is fine and doesn’t affect my riding at all!”

Pedrosa used his first day back on the RC213V to settle back in after the winter break. Setting a best time of 2m 2.003s Pedrosa said, “Today was good, for the first laps I think it was important for me to come back and just ride again. Of course, the first day I was a little bit stiff, not totally smooth on the bike, but we completed some laps and they were good. Today was mainly a test for myself, to get used to the bike again, recover the feeling, feel the throttle and the brakes after a long time off.”

Pedrosa also revealed that he did not use anything new today and instead decided to stick with the machine he tested last November. “The whole day I stayed with the same bike that I tested in Valencia in November and tomorrow the real test will start for us, we will work on the set up and probably try a modified chassis that Honda has brought here according to our requests after Valencia,” he said. 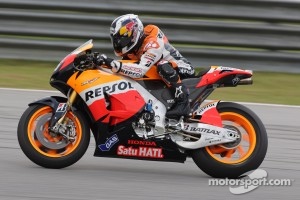 While the world got the first look at all the new 1000cc machines being put through their paces at the same circuit, the one bike they all wanted to see was the new Ducati Desmosedici GP12 machine that Valentino Rossi and Nicky Hayden will race this year. The Ducati riders got to grips with their machines pretty quickly more so Rossi who finished the day just .735s off the leader.

The team is throwing everything at this year’s season and even Ducati Corse Technical Director Filippo Preziosi flew out to Malaysia to personally oversee the three-day test. Hayden also went on track to work on the GP12’s setup, although he wasn’t as quick to get to grips with the new machine, as he is still recovering from an injured left scapula. The American finished the day tenth, having completed 33 laps.

Rossi (2m 2.392s) was very upbeat after today’s test and finished already halved the target of 1.5s that was between himself and the other factory bikes last November in Valencia. The ‘Doctor’ didn’t even try the ‘GP Zero’ that was used in Valencia even though the team took the machine along for comparison to the new machine.

“I’m happy because first impressions are important, and already in the first few laps, I could tell that I like the bike,” said an upbeat Rossi who continued, “Ducati did a good job in a just a short time. The bike is beautiful, but more importantly, it’s nice to ride. The riding position has improved a lot, and it’s better on braking and corner entry. I can brake like I want to and take the lines that I like, and I feel comfortable in general. I was able to ride well and not make mistakes, and there’s a reason for that. It means that the bike can be ridden. It’s more agile in change of direction, and it wheelies much less.

"We’re 7 tenths back today, and of course there’s still a lot of work to do before we can win. We have to improve in some areas: acceleration, electronics, power delivery and setup. I’d say we’ll be able to make a more accurate assessment at the end of the test, because let’s remember, the bike is only 40 laps old. To leave here a second back from the top would be okay because anyway, we know that there’s still much more to be done. But one of the best things from today is that the bike reacts well to changes. That enabled us to drop one or two tenths every outing, which means further progress should be possible,” he said. 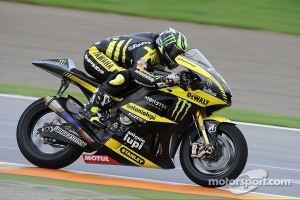 The next rider on the timing sheets was Ducati test rider Franco (2m 4.986s) and he finished ahead of 14th placed man Kousuke Akiyoshi (2m 7.163s). Next came the battle of the CRTs and as was predicted by the paddock it was Edwards who led the way on his Suter-BMW machine with a best time of 2m 8.240s ahead of teammates Torres in 16th (2m 10.671s) and 17th place rider Silva with a time of 2m 11.267s. The test resumes tomorrow and finishes on Thursday 2nd February.