Lorenzo: "Marquez destroyed my race and my foot"

Jorge Lorenzo has hit out at MotoGP rival Marc Marquez for “destroying” his race and causing the foot injury he sustained in his first-corner crash at Aragon.

Lorenzo had started the Aragon Grand Prix from pole and was ahead entering the Turn 1 left-hander on the outside line, before a fast-starting Marquez dived down the inside for the lead.

Marquez, the eventual race winner, ran wide in making the move and bogged down on corner exit, immediately surrendering the lead to Andrea Dovizioso, while Lorenzo high-sided off the bike in his tow.

Lorenzo suffered a dislocated toe and a subcapital fracture of the second metatarsal on his right foot, and is not certain he will be fit for Thailand.

He laid the blame on the incident squarely on Marquez – who will be his teammate at Honda next year.

“From the outside, [it looked like] I entered too fast, I lean too much and I entered too wide in the dirty part, that's why I crashed,” Lorenzo said.

“From what I lived, what I experienced, I entered in the normal line, entered the corner as I did in the seven last years here in Aragon, but I watched Marc go into the inside, very aggressive, not making the corner because you saw where he finished, in the green [paint on the outside].

“And when he saw that I was there, he tried not to let me pass into the corner, and I didn't have any options [but] to go to the dirty part.

“Because we were very wide and already the other riders were coming, if I didn't want to lose five or six positions, I had to open the throttle.

“In Misano [last time out] the crash was completely my fault, this time Marc destroyed my race, destroyed my foot, destroyed also the big possibility that I have to win and probably also [the] Thailand race.”

Lorenzo said he was made more “upset” by the replay, which he feels made it look like an unforced error on his part.

“And it's not like that," he continued. "And Marc knows. He didn't leave me space, he make me another block pass, like in the past in some races. And I didn't have any options than crash - crash or go outside the track.

“He didn't want me to enter the corner and he didn't care about me, no? Just make the corner, brake very late, and just don't think about the exit of the corner, just enter. And forget about my line.”

Speaking about the incident, Marquez compared it to his late-race run-in with Dovizioso, who ran him wide with an aggressive dive down the inside at Turn 14.

He said: “I haven’t seen the [Lorenzo] crash, and didn’t see the [pit] board saying ‘Lorenzo out’.

“In the first turn I came in quite fast and sliding, I went wide, it was very similar to another moment with Dovizioso where we touched, and I went on the green [paint].

“That’s the danger of this track. If you go on the dirty part of the track, it’s easy to crash.

"It’s a racing incident, but when you go on to the dirty part of the track amid all the adrenaline of the start, you have to be calm not open the throttle [too early]." 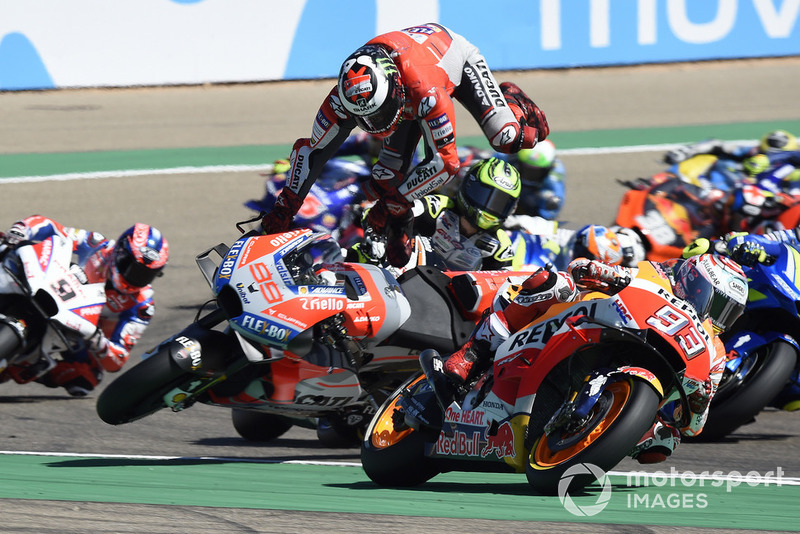 Marquez: Tyre gamble "the only chance" to beat Dovizioso