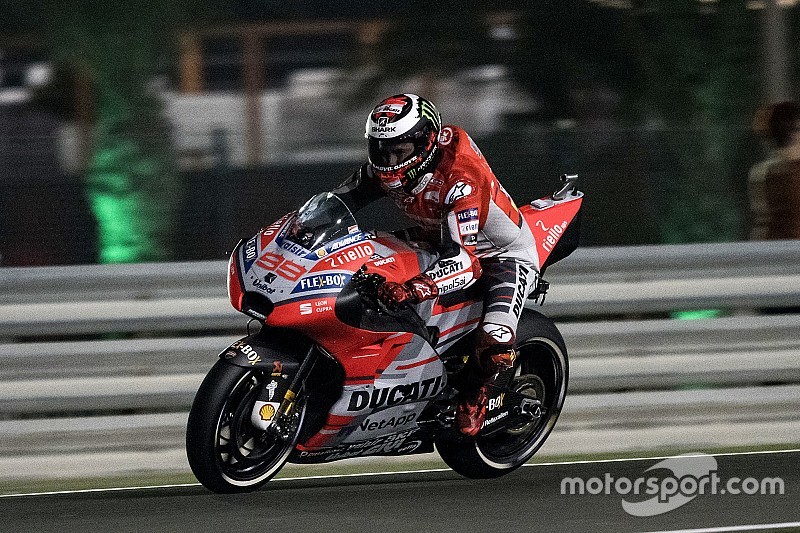 Jorge Lorenzo admits he was "lucky" to avoid serious injury as a result of the brake failure that caused his retirement from the Qatar MotoGP season opener.

Ducati rider Lorenzo was unable to finish the first MotoGP race of the season after he suffered a crash while running in 10th place on Lap 12.

The Spaniard, who had a bad start due to having too much wheelie off the line, said his Ducati developed front brake problems early in the race.

With the issue "getting worse lap by lap", it was the cause for Lorenzo's eventual retirement, and the Spaniard said he was "lucky" the incident happened at Turn 4 and not at the end of the main straight.

"[It was a] problem with the brake," said Lorenzo, whose teammate Andrea Dovizioso won in Qatar.

"I was really lucky because it didn't happen in the first [corner] because if it happened at 300 km/h it would have been a different story. I was lucky about that but today we have zero points."

"I just felt the level of the front brake was getting closer to my fingers and I didn't have brake after some metres.

"I needed to try to use less front brake and more the rear, tried to delay this thing that was getting worse lap by lap.

"Unfortunately when I arrive to this turn 4 the first part of the brake was okay but suddenly I just miss completely the brake so I have no brake.

"I was going very fast to the gravel, to the wall and I jump off the bike to avoid hitting the wall."

In his first season with Ducati last year, Lorenzo was usually only strong in the early stages of the races before fading later on.

But the three-time MotoGP champion felt he was strong in the second half of the race in Qatar "for the first time" since he joined Ducati.

"For the first time, I felt that I had a better second part of the race with the Ducati but unfortunately I couldn't prove it because I crashed," he said.

"I think I could fight if I didn't have the problem with the braking to stay with the front group. I don't know, everything was possible, win the race, finishing third or fifth."

Vinales felt "better than the last six months" in Qatar