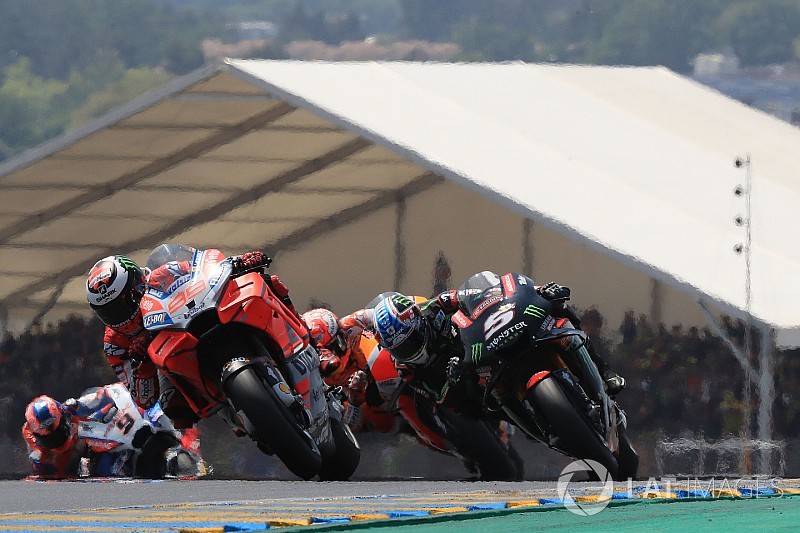 Jorge Lorenzo says the physical demands of Ducati's 2018 MotoGP bike led to him struggling for "stamina" and tumbling down the order in the French Grand Prix.

Lorenzo darted to the lead from the second row at the start of the Le Mans race, and headed the pack for nine laps.

Unable to pull away, however, he began to slow down and started to drop positions, completing the 27-lap event in sixth place.

"Basically today my main problem was that physically I couldn't support, I don't have a good support in the fuel tank, to keep my stamina during all the race," Lorenzo said.

"I am suffering this from the beginning, and in tracks like Austin and here, that you have a lot of hard brakings, I suffer a little bit more.

"With this bike we still don't find the solution, because last year bike was different, in the ergonomy [design] of the old bike I suffer less."

The Spaniard believed he would've been able to keep his rivals at bay for longer if he didn't begin to struggle physically.

"We have a good braking, I brake very aggressive, very strong at the beginning, and we have a good acceleration, I'm very good in the pick-up area [on corner exit]," he continued.

"But just every lap is a little bit more difficult to keep the corner speed you need to slow down to turn the bike, and they were getting closer so finally they overtook me.

"We have to try to improve that - for sure, if they improve that, for them will be more difficult to catch me.

"And if we improve this direct problem of the ergonomy of the bike, I can keep my energy for longer, until the end of the race, and be more fresh to think, to ride and to attack also in case they overtook me, no?"

Lorenzo stressed that his physical shape was not the problem, and that the crux of the issue was not in his training regimen but in the shape of the fuel tank on the 2018 Desmosedici.

"This bike in the braking has a different fuel tank, shorter, more forward. [It] doesn't support and it's more demanding in that area for the arms than last year's bike, so we need to find the solution."

Lorenzo said he and Ducati will look for fixes in MotoGP's upcoming midweek test at the Barcelona circuit.

"In Montmelo we're going to try many things to solve this problem because with more energy I believe I could be faster and closer to the winner," he said.