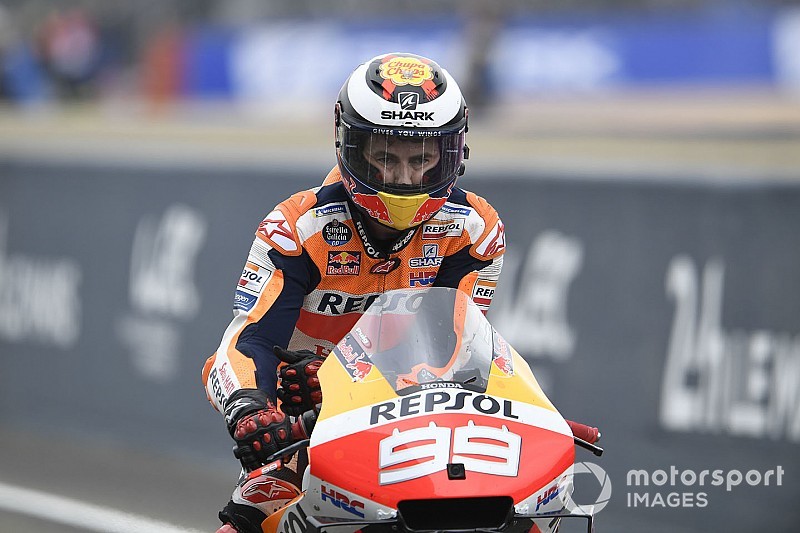 Honda MotoGP rider Jorge Lorenzo feels being able to compete with the satellite LCR bikes in Le Mans demonstrated his progress, even if the result wasn't a major improvement.

Lorenzo finished the French Grand Prix 15 seconds behind race-winning teammate Marc Marquez as he scored an 11th-place finish, going one better than his previous best result with the Honda.

The Spaniard – who had left the previous grand prix at Jerez “sad and worried” - was encouraged by ending Friday practice fourth fastest in the dry, and spent most of the race in the top 10, running close to LCR rider Cal Crutchlow and ahead of Crutchlow's teammate Takaaki Nakagami.

“[I am] still missing something, as the final result demonstrates - but I think less than before,” Lorenzo said afterwards.

“I think this weekend we saw some progression, in my speed especially, after the Jerez test we found something on the bike, here we found some other pieces that help me a little bit, maybe not a huge advantage but a little bit, and this shows something, no?

“For example, [Friday] was the first day in the championship that I finish top five at the end of the day [Friday], top eight in the grid, first laps I could fight with riders like [Franco] Morbidelli or the Ducatis, at the end of the race with [Alex] Rins for example - riders that are faster than the riders I was fighting with in other races.

“Apart from Qatar, that was a very slow race, it [Le Mans] was the race where I finished closer to the winner in the final result but also on the fast lap, just seven tenths from the fastest lap.

"Today was the first time for example that I finish in front of Nakagami, not only in the race but also in the pace and speed on most of the weekend. It's true that he don't have the official [2019-spec] bike like me, but he knows more the bike than me.

“Also with Cal, Cal was there, I could see him and he was two tenths or three faster on pace but he was not so far.”

Lorenzo believes the weekend will have given him and Honda “more conviction” that he can get on the required level with the RC213V.

“The only negative thing of this weekend is the position. I just improve one position from the best [previous] position. But in general the weekend was really better than the others.

“We arrive with probably more conviction that it's possible to do. It's a long process, because is not easy, this bike, to understand and to take the maximum.”