Jorge Lorenzo sealed a masterful victory at today’s AirAsia Grand Prix of Japan with the Yamaha Factory Racing rider pushing to the limit to stay ahead of main championship rival Marc Marquez at the Twin Ring Motegi circuit with Repsol Honda teammate Dani Pedrosa securing another podium finish to the delight of the Japanese fans.

To take this win at the home of Honda makes me very happy.

The 24 lap race got underway with bright sunshine making for a much quicker pace than what came in the previous two days and the frontmen made the best of the dry asphalt with Lorenzo getting off to a flying start while Marquez fell back into third behind Valentino Rossi who leaped into second behind his Yamaha Factory Racing teammate. Pedrosa settled into 4th while Bradley Smith had made a great start for the Monster Yamaha Tech 3 team.

There was only a couple of laps gone when Energy TI Pramac Racing’s Andrea Iannone had an off track excursion but was able to rejoin the race. Aleix Espargaro got off to a great start on his Power Electronics Aspar machine and leading the CRT battle by a mile with the Spaniard ahead circulating in 6th place at the start but following a strong pass from LCR Honda rider Stefan Bradl he started to fall behind. There was also bad luck early on for Rossi who ran wide into the back straight and re-joined the race in 11th place while the front three men had already built a comfortable lead on the rest of the field. 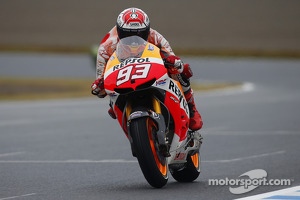 There were retirements in quick succession from Came IodaRacing Project’s Lucas Pesek and Cardion AB Motoracing’s Luca Scassa while Rossi was starting to fight back through the CRT riders. The top three riders were now in a good rhythm and had pulled a long margin ahead of Bradl who was locked in battle with GO&Fun Honda Gresini’s Alvaro Bautista for 4th while Smith continued to lead teammate Cal Crutchlow while Rossi had fought his way back into 8th ahead of Ducati Team teammates Andrea Dovizioso and Nicky Hayden.

Moving past the halfway point, Marquez was right on the rear of Lorenzo who was riding in his customary flawless style while his main rival was also making the spectacular moves on his RC213V that the fans have become accustomed to. Further behind Bautista was leading Bradl now and Crutchlow was also able to pass teammate Smith. Espargaro’s race went from bad to worse in just a couple of laps when battling with wildcard entry Katsuyuki Nakasuga and coming off his machine in a high speed crash but walking away unhurt.

The final third of the race saw Rossi battling through the field and ending in 6th place ahead of Crutchlow while back at the front Lorenzo was dominant in his pace and each time Marquez registered blisteringly fast laps Lorenzo responded with Pedrosa resigned to a spectator’s position in third place. Marquez began to run wide in some of the corners when getting too close to Lorenzo and this ultimately gave the Spaniard the space that he needed to maintain his pace to the end of the race to take his second win on the bounce and 7th victory of the 2013 season. Lorenzo’s victory reduces the point’s gap to Marquez by just 13 with the final round taking place on 8th November at Valencia, Spain.

Lorenzo was thrilled with his victory and was delighted to give his Yamaha team the win in the back yard of their biggest rivals. He said, “We chose the soft tire and the others chose the hard tire, we knew that at the end of the race we might have problems but finally I could push even more the lap times. The strategy could have been different but to take this win at the home of Honda makes me very happy.”

Marquez was very happy with securing valuable points and to be travelling to Valencia with the championship lead. Speaking afterwards Marquez said, “Second place today is a very good result. After my crash in warmup, I knew that it would be difficult to be consistent - because in the morning I hadn't managed that either. This was my first time at this track with a MotoGP bike and in practice I was unable to get any references in the dry, leaving me with only the warmup and the race in which to find my way. 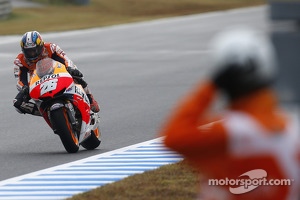 I saw that Jorge was a little stronger than us here and I had a couple of scary moments, making me decide that twenty points and the gap being reduced by only five points would be a decent result. There is only one race remaining - the most important of the year - so we shall try to be more focused than ever at Valencia,” Marquez added.

Pedrosa was happy with another podium but didn’t enjoy finishing third once again. He said, “It was a bit of a boring race for me, because I tried to give everything but I had a lot of problems exiting the corners; I was unable to get on the gas fully and I lost a lot of time to Marc and Jorge. I was third for the entire race, trying to hold onto them. However, at the midway point of the race my pace started to become slower than theirs. Now we have to focus on the next race, in Valencia, where we shall try to do as well as possible.

Great comeback by Andrea Iannone at the Motegi GP