Lorenzo hoped to be more competitive at Jerez 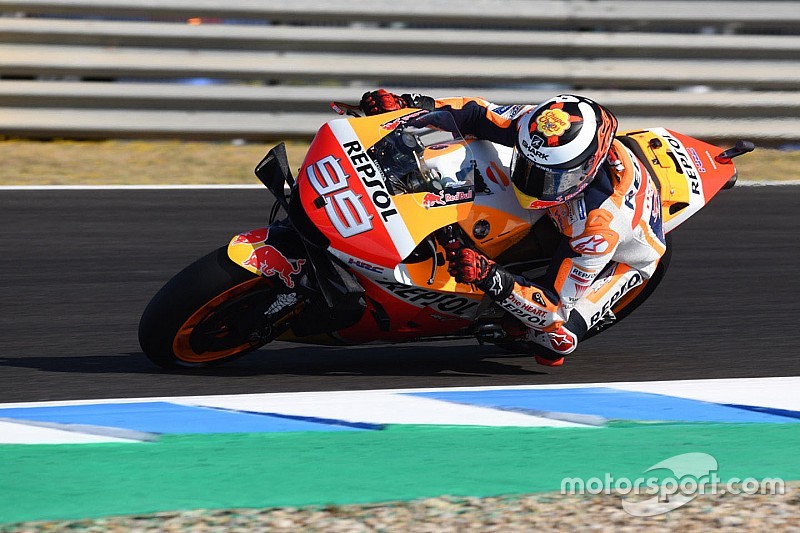 Repsol Honda MotoGP rider Jorge Lorenzo admits he was hoping to be more competitive after the opening day of practice at Jerez, which he ended in ninth position.

Having started the season with limited testing experience with Honda and also not fully fit, Lorenzo had named Jerez as the first circuit on the calendar where he could start showing his potential with his new team.

After finishing 13th and 12th in Qatar and Argentina, and retiring at Austin, Lorenzo said that he is targeting a position in the first two rows on the grid at Jerez.

He kicked off the weekend accordingly, as he was a close second behind Marc Marquez in FP1, but he was only ninth in the afternoon session, more than half a second off the pace.

Lorenzo admitted that his afternoon time is more realistic than the morning result, and that he was expecting to be more competitive as he continues to not feel comfortable on the Honda.

"I was hoping to be more competitive and I was this morning," he said. "In the afternoon I had more trouble. I need more experience with this bike when track circumstances change.

"The most real Lorenzo is the one who finished ninth, because the race takes place at two o'clock in the afternoon."The morning position [second] is good, but I would like to feel better on the bike. I'm still not quite comfortable

"I don't have the confidence I would like in the fast corners."

Marquez and Lorenzo spent a couple of laps running together in FP2, and the former gave some details on his new teammate's strong points on the Honda.

Marquez said: "I followed Jorge because this morning he was fast, and just try to understand.

"I saw some strong points of the riding style, some weak points I will not say. The strong points, he is able to go into the corner very fast.

"One of the things that already he was very fast at Ducati but even with Honda he is able to go into the corner very fast. This is positive."

But Lorenzo said that he needs a set-up which allows him to brake earlier as the way he currently rides is too physical.

He explained: "There were some problems, but I'm sure we'll find a more suitable set-up. I have to find a set-up that will allow me to brake earlier.

"Tomorrow we will change the method to see if I can win those tenths that bring me closer to Marc.

"The bike is competitive, it's a winning bike. The Honda is a more compact bike and I still need a little more time because in the braking, after the laps, my arms still get tired."