Defending world champion Jorge Lorenzo delivered an incredible performance today to take victory in the Grand Prix of Japan, claiming the Motegi circuit for Yamaha. A dramatic weekend dominated by complicated weather conditions meant the only dry set up time for today’s race was this morning in the final warm up session.

Lorenzo rose to the occasion, firing off the start line like a bullet in front of Yamaha’s home crowd to lead the race into the first laps. The Mallorcan was able to build a gap of nearly two seconds in the first three laps then saw it cut as championship rival Marc Marquez closed in. Marquez and Dani Pedrosa were able to get onto the heels of Lorenzo but unable to pass. The defending champion held on to the line to score his 51st Grand Prix victory, crossing the line just over three seconds clear of Marquez.

Teammate Valentino Rossi made a great start to the race from the second row and tucked in behind Lorenzo in second position as the Japanese Grand prix got underway. Unfortunately a lack of braking power on turn 11 of the second lap caused him to run wide, allowing Marquez and Pedrosa past. He then got back on track but suffered the same issue the following lap, dropping down to 11th in the process. In typical Rossi fashion he then put his head down and made several passes as he fought back up the field to finish in sixth position. 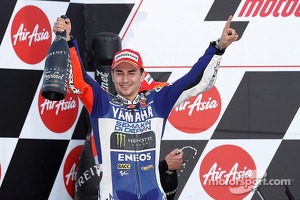 The stunning victory by Lorenzo brings him five points closer to Marquez. 13 points separate them now as they head to the final round in Valencia. Rossi increases his point score to 224 and remains in fourth place in the standings.

Jorge Lorenzo
1st / 42'34.291 / 24 laps
“We chose the soft tyre and the others chose the hard tyre, we knew that at the end of the race we might have problems but finally I could push even more the lap times. The strategy could have been different but to take this win at the home of Honda makes me very happy.”

Valentino Rossi
6th / +24.637 / 24 laps
“I made a great start but on the second lap when I arrived at turn 11 I had not enough power on the brakes and I went too deep and lost two positions. On the next lap it was the same. It was my mistake then because I should have remembered from the lap before that I didn't have enough on the brakes. I couldn’t stay on the track and lost a lot of positions. After that I tried to do the maximum. My pace was quite good and think I could have been in fourth place but it wasn't enough to get on the podium.”

With only 45 minutes of dry track time available on a weather-hit weekend at the Twin Ring Motegi ahead of this afternoon’s 24-lap race, Crutchlow and Smith engaged in a thrilling battle in the first half of the race.

In easily the best conditions of the weekend, it was Smith who led the Monster Yamaha Tech 3 charge after he made another one of his super fast reactions off the line to rocket from 13th on the grid into the top six.

Smith opted to race the extra soft compound Bridgestone rear tyre to boost his speed in the early laps and it was a strategy the paid off handsomely, as he hunted down Stefan Bradl for a place in the top five.

A mistake by Valentino Rossi in the hard braking zone for Turn 11 on lap three elevated Smith into the top five and he then rode magnificently to keep hard charging Crutchlow at bay until lap nine.

Crutchlow went for a different tyre selection strategy and the harder option rear tyre kept him firmly in contention for the top six until the final stages when he was unable to maintain a challenge to Rossi.

Crutchlow’s seventh position moved him to 188-points in the Championship rankings and with just one race remaining, Alvaro Bautista can no longer catch him to claim the accolade of being the top non-factory rider this season.

Smith’s brilliant ride to eighth saw him take a giant leap towards securing 10th in the overall World Championship standings, now he is 19-points clear of Aleix Espargaro.

Smith’s impressive rookie season is certainly finishing strongly, with the 22-year-old claiming six top 10 finishes in the last seven races and he finished just over three seconds behind Crutchlow this afternoon.

After a gruelling three-week world tour to Malaysia, Australia and Japan, the Monster Yamaha Tech 3 Team now heads back to Europe for a well-deserved rest ahead of the final race in Valencia on November 10.

Cal Crutchlow
7th - 188 points
“It was a very difficult race because from the first lap I realised I was having an issue with the front brake overheating and choosing the harder rear tyre was not the best choice. Bradley used the softer tyre and in the first few laps, the problem with the brake meant I was having to focus on not running into is the back. My tyre was good for the second half of the race and I could pass Bradley but when Valentino came through he was a bit faster. We were just missing a few things to be more competitive but even with the soft tyre like Lorenzo, I wasn’t going to be racing at his pace. He really did a great job. The positive is with today’s result assured the fifth position in the Championship, and my target before the first race was to finish best non-factory rider. Now we can go home and get some rest after a tough period before trying to end the season strongly in Valencia."

Bradley Smith
8th - 107 points
“I’m pleased with the eighth position. I knew it would be been a tricky race starting from 13th, but fortunately I made a good start and I was trying to push at my maximum right from the off so that I was able to follow Bradl during the first laps. We definitely made some improvements on a full fuel load during this weekend and it helped me a lot to find a good rhythm. I saw Valentino making a mistake at the beginning of the race, so I knew he might come back and I just tried to follow him when he passed me. Today was probably the smallest gap to the other satellite riders so far and that makes me happy, especially considering that we had just one dry session this morning to set the bike up. I’m pleased with the progress we made during the season and this 10th place seems to be safe and now I’m just looking forward to make a good race in Valencia to end the Championship on a high.”

Katsuyuki Nakasuga Yamaha YSP Racing Team
11th Time: +53.345 sec
“My participation in the race this time was coupled with development responsibilities for the Yamaha YZR-M1 machine. Since my machine was fitted with test parts and I was able to finish the entire race successfully, I was able to provide the development team with a lot of good data. I believe that we have gotten a clear vision of things that need to be done and I think this is going to help next year’s YZR-M1 evolve into an even better machine. For the development team, this is our second time participating in a MotoGP race, following the one last year. I feel that this kind of experience helps build our motivation and contributes to making the machine even better. However, I must say that I was disappointed with my result in the race, I don’t think we were able to get the set-up as good as it should have been.”