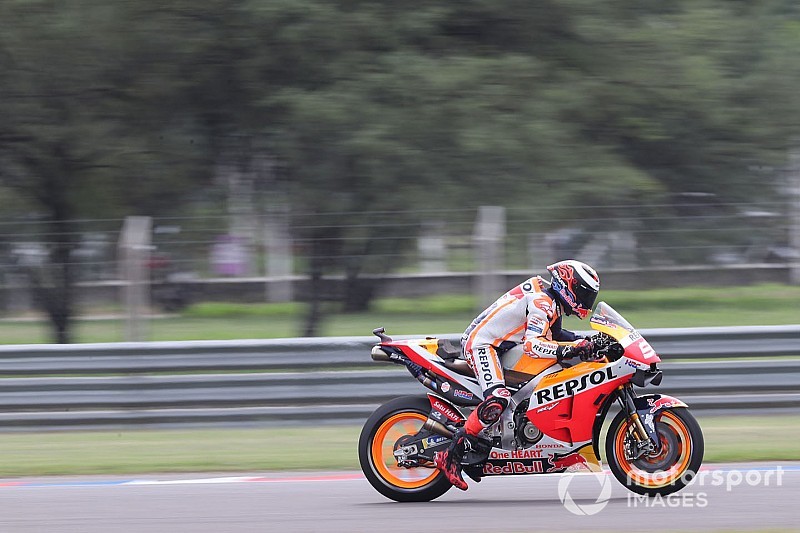 Jorge Lorenzo says he will not be pushing in MotoGP's Argentina Grand Prix if conditions require him to take too many risks, as he wants to prioritise staying fit for future races.

Honda rider Lorenzo, still recovering from wrist and rib injuries, said on Thursday that he will be "extra" careful not to crash again at Termas de Rio Hondo.

He qualified 12th for the race, but as rain is a strong possibility for Sunday, Lorenzo stressed that if he has a poor feeling, he will be content merely to get through the day without an accident.

"If it is wet, will depend a lot on the feeling," Lorenzo conceded. "If the feeling is good, knowing that I am injured, I will try to do my best.

"If the feeling is not so good and I need to take so many risks to be competitive, maybe is better to save a little bit the day and not to crash to get injured again because.

"I think my real opportunity will arrive in the next tracks, not this time.

"If it is dry, try to ride a little bit better, more of the bike, improve a little bit the setting or the position on the bike in the warm-up, and just try to get closer than this one second that I get from Marc [Marquez]."

Lorenzo set the 11th-fastest time in qualifying, but had his best lap deleted for running wide at Turn 14, which he admitted to being a "fair" penalty.

"I went a little bit wide and I touch the green zone so they take away the first fast lap that was the fastest, this made me go one position back, but doesn't change so much," he said.

"I will be a little bit more right on the start, little bit behind, but doesn't change five or six positions, it is not a big drama. Was fair to lose this lap."

Lorenzo set the lap that was later deleted while running right behind teammate Marquez.

Comparing himself to his teammate, Lorenzo said that in a few places he was faster than Marc, but on others "he loses so much still".

He recalled: "I just was half a second slower than Marc. In some areas I was faster than him, not so many. In others I was the same as him but in some others I lose so much still.

"I need to understand these areas what is happening, it is gonna be difficult to improve it on the warm-up and the race but for next tracks and the future will be good information."

Rins puzzled by Suzuki's loss of form in Argentina