Following the tragic news of Nicky Hayden's passing, Jamie Klein reflects on the fallen champion's first and arguably greatest MotoGP win, which came on the series' return to Laguna Seca in 2005.

When it comes to remembering Nicky Hayden, the image that most will recall first is that of him on his Repsol Honda bike, wrapped in the American flag, crying with emotion after beating Valentino Rossi to the 2006 title on that unforgettable day in Valencia.

But arguably the most impressive day of The Kentucky Kid’s Grand Prix career came when he took his first MotoGP victory at Laguna Seca the previous July – a day when he was truly in a class of his own, and in his own words, “unbeatable”. 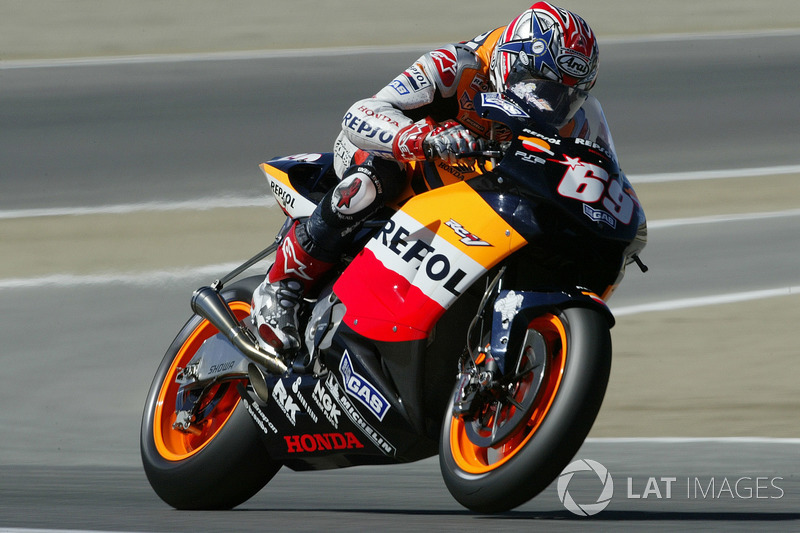 The 2005 season, Hayden’s third in MotoGP, had not started well. His Repsol Honda team had been in turmoil since losing Rossi to Yamaha at the end of 2003 and had not won a race since, although satellite squads Pons and Gresini had picked up some of the slack.

Veteran Alex Barros was hurriedly signed to replace Rossi for 2004, the Brazilian finishing comfortably ahead of Hayden in the points, and in the early part of 2005 the former AMA Superbike champion had been overshadowed by another veteran teammate in the form of Max Biaggi.

In seven races, Hayden had finished no better than fourth, and was languishing down in seventh in the standings ahead of his home race – 27 points behind Biaggi, around whom Honda had chosen to focus its efforts to dislodge Rossi and Yamaha.

But Laguna Seca would be a different matter entirely. The Californian circuit had been absent from the MotoGP calendar since 1994, meaning only a handful of riders had experience of the track. Hayden was one, having won an AMA race there in 2000 and taken fourth in a World Superbike wildcard outing in 2002.

Fellow Superbike converts Troy Bayliss and Colin Edwards also knew the track – but Rossi, who had won six of the first seven MotoGP races of 2005, had never raced there.

It was Pons Honda rider Bayliss who led the way in first practice by a scant 0.092s from Hayden, but from that point onwards, the timesheets were monopolised by the 23-year-old from Owensboro.

Come qualifying, Hayden duly scooped the first pole position of his MotoGP career, beating former teammate Rossi by 0.354s, with Alex Barros completing the front row in third, a full six tenths slower than Hayden. Bayliss and Edwards made up the top five.

On race day, Bayliss briefly challenged Hayden for the lead with a lightning start, but the #69 held on to top spot as the pack exited the Andretti hairpin for the first time and quickly set about building a gap to his pursuers. 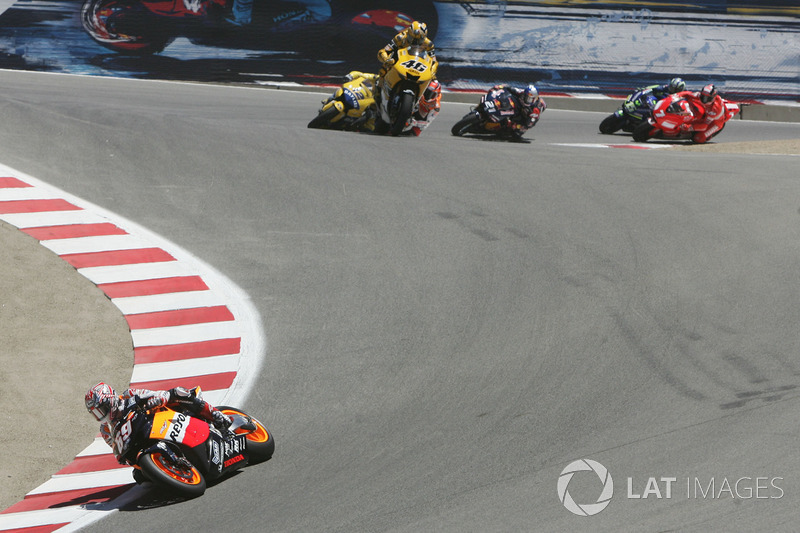 Hayden was a second clear by the end of the opening lap, as Rossi passed Bayliss to retake second, and the gap to the Italian rider was out to 2.6s by the end of lap 10.

By that stage, Edwards was up to third and closing in fast on his Yamaha teammate Rossi, and on lap 16 the Texas Tornado executed a superb pass at the fearsome Corkscrew to snatch second place.

It seemed Edwards was on course to challenge Hayden for the win at that stage, and three laps after passing Rossi he had cut the Honda man’s advantage down to 1.8s.

But Hayden responded by upping his pace, keeping the gap stable and taking the chequered flag by 1.9s – in the process securing Repsol Honda’s first win of the post-Rossi era.

“Laguna 2005 was like a dream for me because everything worked perfect,” Hayden told MotoGP.com.

“In racing, it doesn’t always go like a dream. But that week, everything was perfect. The bike, from the first practice, was working well. Every change we made was only better.

“I remember being here in the lead in the race, and my mind wondering, coming out of that corner, that Turn 3, I remember looking up at the tower during the race, when I’m leading the race and I should only be focused.

“My mind was relaxed. I was looking to see who was in second, third place, who else was doing what. I got the pole position, I got the fastest lap, won the race. On that day, I felt unbeatable.” 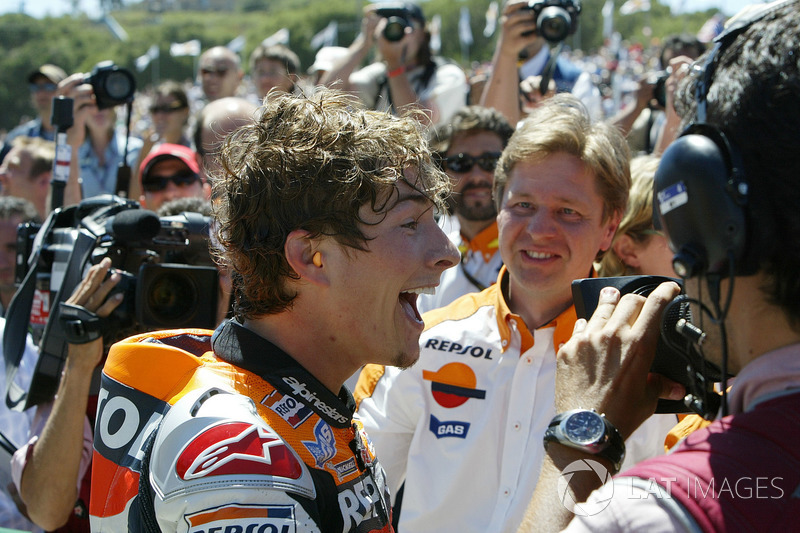 Laguna Seca was a turning point of Hayden’s 2005 campaign, as he went on take two more pole positions and score five podiums in the final eight races – moving up to third in the points, only behind Rossi and runner-up Marco Melandri, but crucially some way ahead of Biaggi.

In 2006, Biaggi made way for the rider that Honda believed was its future – Dani Pedrosa. But the Spaniard wouldn’t be ready to challenge for title honours on his first year on ‘big bikes’, making Hayden the Repsol squad’s de facto number one challenger despite being tasked with developing the 800cc bike that would replace the RC211V in 2007.

Hayden went on to win another two races in his career, both in that title-winning 2006 season. The first was at Assen, where Edwards seemed on course to break his duck before crashing at the last corner of the race; the second was a reprise of his ’05 win at Laguna Seca, where he passed Suzuki’s Chris Vermeulen and pulled away to seal a second successive victory on home soil.

Both triumphs were well-deserved, but by then he’d established himself as a bona fide title contender, whereas before his 2005 victory he was still the young pretender that Honda was reluctant to fully throw its weight behind.

Rossi’s crew chief Jerry Burgess had expressed an interest in working with Hayden in 2004 when the Italian rider departed for Yamaha, but when the Australian was told he’d be assigned to Barros if he stayed loyal to Honda, he duly followed Rossi out of the door.

The following year, HRC brought back legendary engineer Erv Kanemoto in a bid to revive its flagging fortunes, but again, he was assigned to Biaggi instead of Hayden.

On that July day in California, the "unbeatable" Hayden showed Honda exactly why it should have had faith in him from the moment Rossi left. 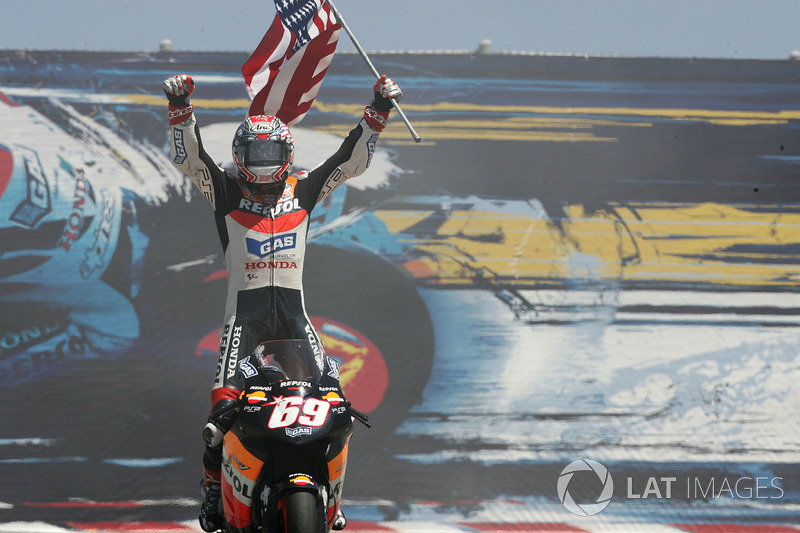