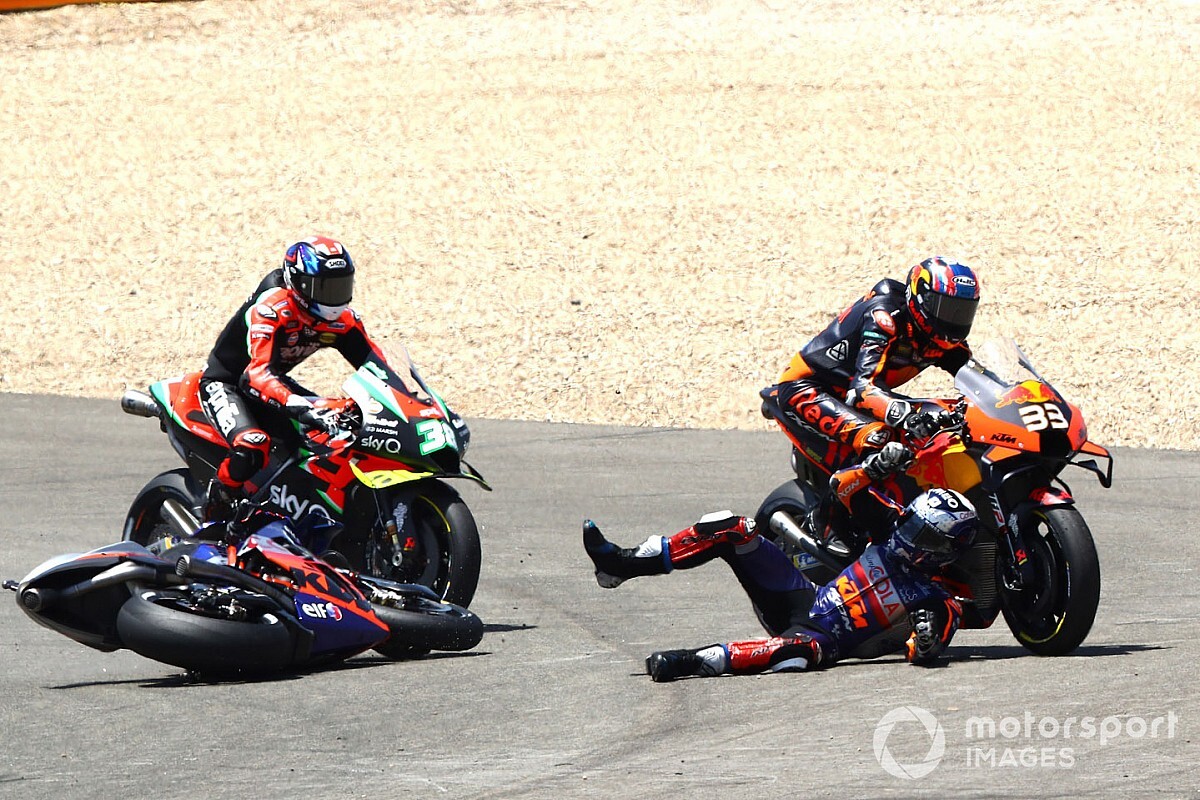 Oliveira qualified a career-best fifth and as top KTM rider for the second race at Jerez, but a burning clutch meant he got a poor launch and was reeled in by Binder from ninth on the run to Turn 1.

As the field piled into the first corner, Danilo Petrucci threw his Ducati up the inside of Binder, who was caught unaware as he tipped in and had to stand the bike up. In doing so he clipped the rear of Oliveira’s Tech 3 machine and sent his future factory KTM team-mate crashing heavily.

The incident was investigated by Race Direction, but no action was taken. Binder would crash out on lap 13 at the last corner.

Explaining his side of the story, Binder said: “As far as I was concerned, I was the only one on the inside. So, I never knew someone was going to come even tighter than I was.

“As soon as that happened, I knew what was going to happen. The second I picked up the bike I was literally on Miguel’s back wheel. It was unbelievable. For me it’s horrible because he’s my good mate and also he’s another KTM rider with his best qualifying, so he was up for a good race as well.

“All I can say is sorry and you live and you learn and I will try my best never to do that again.”

Binder and KTM team manager Mike Leitner visited Oliveira to apologise afterwards, with the Portuguese rider not arguing with their point of view having not watched a replay of the clash at the time.

But having seen a replay since then, Oliveira says he doesn’t believe that Petrucci was at fault and that Binder was “just too optimistic”.

“There are always different versions of what can happen, but it’s very hard to say once you are in the rider perspective,” said Oliveira. “But looking at all the footage, I think Brad was just too optimistic into the first corner. Eventually he had nowhere to go, so he clipped the back wheel of my bike. I ended up crashing.

“We spoke with Mike Leitner and Brad. Of course, they came to apologise because we are going to be future teammates next year and we don’t want to have any friction. At that time I didn’t watch the images, so I didn’t have anything to argue with them.

“But after I watched the images and apparently their version is Danilo upset Brad and that’s why Brad needed to lift up the bike. But, in fact, that’s really not what happened. So, I have these two versions here, but I accepted obviously the apology and this is racing.”