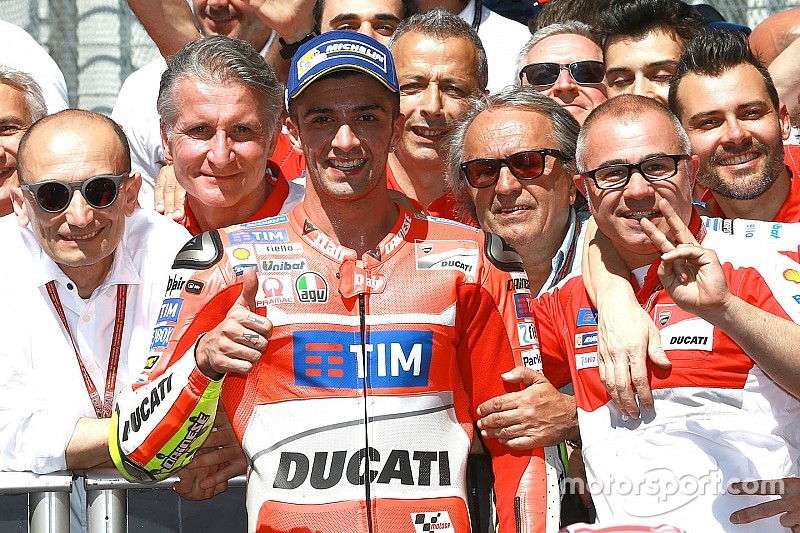 Mugello podium finisher Andrea Iannone was left to rue his poor start to his home race that he believes cost him a chance of a maiden MotoGP victory.

Starting from the front row, the Ducati rider had a poor getaway, and was only 12th at the end of the opening lap.

Although he recovered to cross the finish line in third place, the Italian said he had the pace to fight with leaders Jorge Lorenzo and Marc Marquez, as shown by setting the fastest lap of the race on the very last lap.

"I'm very happy because it's very important for us, especially in this place," said Iannone, who will join Suzuki next year. "A podium is always a good performance.

"I'm very disappointed about my start, it was very bad and after the first lap I was in 12th.

"After three or four laps, step-by-step I improved my pace and I'm very happy for this because, in the last lap, I got my best lap of 1m46.6s, and it is very important for us.

"For sure we had a good possibility to fight for the victory, and this for me is very important. I wanted it, but for sure we try in the next race."

Bad starts an issue since the start of the season

Iannone said he has been struggling with starts all season and, although he felt he made a breakthrough before the weekend, it was once again the weak point of his race.

"In general this year in every race my start is very bad, I don't have a good feeling with the clutch," explained the Italian.

"We have been trying to adjust this problem and change the setting of the clutch, my team works a lot to improve the situation but for me it's always very difficult.

"This weekend I had a little bit more tranquility because before the weekend I tried the start and it went well, but in the race it did not, unfortunately."

Iannone secured the second podium finish of his 2016 campaign, and is currently ninth in the standings.

Baz in doubt for Catalunya after suffering broken foot