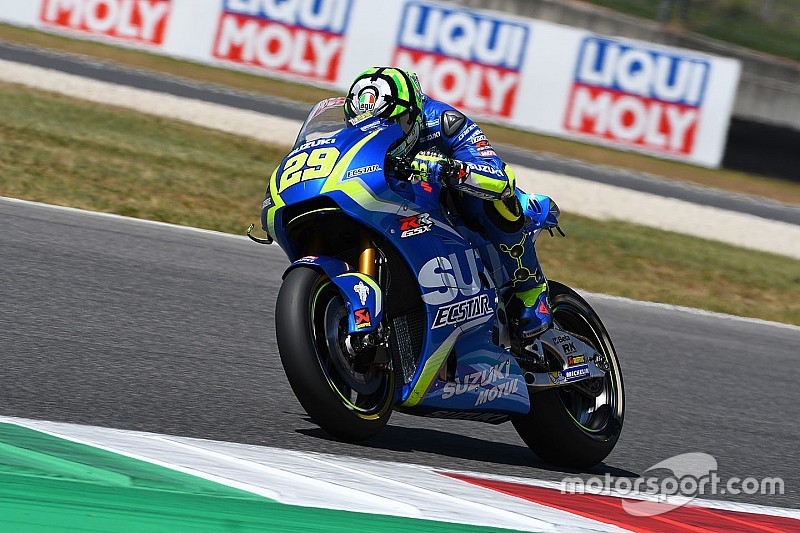 Suzuki will try a new chassis for its GSX-RR in the coming weeks that Andrea Iannone hopes will improve its MotoGP form.

The Japanese manufacturer impressed in its second season back last year, Maverick Vinales finishing fourth in the championship with a victory and three other podium finishes to his name.

Iannone has arrived from Ducati to replace Vinales, now the championship leader at Yamaha, and is 14th in the points with a best race result of seventh.

He has cited rear-wheel spinning as a big issue to tackle, and hopes a new chassis in development will help change Suzuki’s fortunes.

“The feeling with the bike is not 100 perecent, and in MotoGP this is a big problem,” he said. “I think we understand the direction but it’s difficult to improve in the races.

“We are waiting for the new parts from Japan, and I think in [a few races] we have a good chance to improve, but at the moment we will try our best with this bike.

“[Engineers in] Japan are working very hard, starting production on a new chassis for the future. For sure we will try it. Sometimes it’s better, sometimes not.

“But we understand the direction and will try to work very well to recover and close the gap.”

Iannone finished 10th at Mugello, dropping from eighth in the closing laps with a “big drop” on the rear tyre that “changed completely the character” of the bike.

Suzuki technical manager Ken Kawauchi said post-race that the team “will be testing many elements of the bike in order to improve acceleration and traction” in the session following next weekend’s Barcelona race.

Iannone has had three different teammates during his first six rounds with Suzuki, as a result of rookie Alex Rins breaking his wrist in two places in a crash at Austin.

Rins is expected to return in a post-race test at Barcelona, and Iannone believes that will help Suzuki’s development.

“I hope Alex comes back very soon,” he said. “He’s a young rider and a fast rider and from the beginning we have worked together to make the bike a little bit more fast.

“At the moment I have only my data, sometimes I see the data of Maverick [Vinales] last year, but it’s different.

“Especially this year from the beginning we had a different front tyre and we at the moment struggle a lot on the braking point with the front and it’s difficult for us to release the brake.

“And for this it’s difficult to understand very well. I hope Alex can come back very soon and start to work.”