After clearing all doubts generated by the MotoGP pre-season in last week’s Qatar Grand Prix, Suzuki and Joan Mir have a new task on their hands for the Doha GP.

Despite spending winter testing at the same Losail circuit where the first two round of the 2021 calendar are being staged, Mir came into his title defence admitting he was only "70%" ready after a useless final day of the test denied him crucial track time on the GSX-RR's new frame.

Mir's troubles continued into the Qatar race weekend, his main issue coming under braking, with the world champion forced to go through Q1 in qualifying and only managing 10th – one spot behind teammate Alex Rins.

Admitting he was "very pissed off" after Saturday, he said after Sunday's race: "It was a difficult weekend, because I was not able to have a good feeling.

"You could see it in my face every session, I'm not really good at hiding these kind of things. But at the end we found the way – a bit late, but it's important."

Reverting to settings used last season, Mir was able to rise from 10th to fourth at the chequered flag – denied second after he ran wide at the last corner and the "animal" Ducatis of Pramac's Johann Zarco and factory rider Francesco Bagnaia out-dragged him. Nevertheless, Mir ended Sunday happy.

Mir's satisfaction was more than justified. Not so much for the final result, but for how he managed to get there. 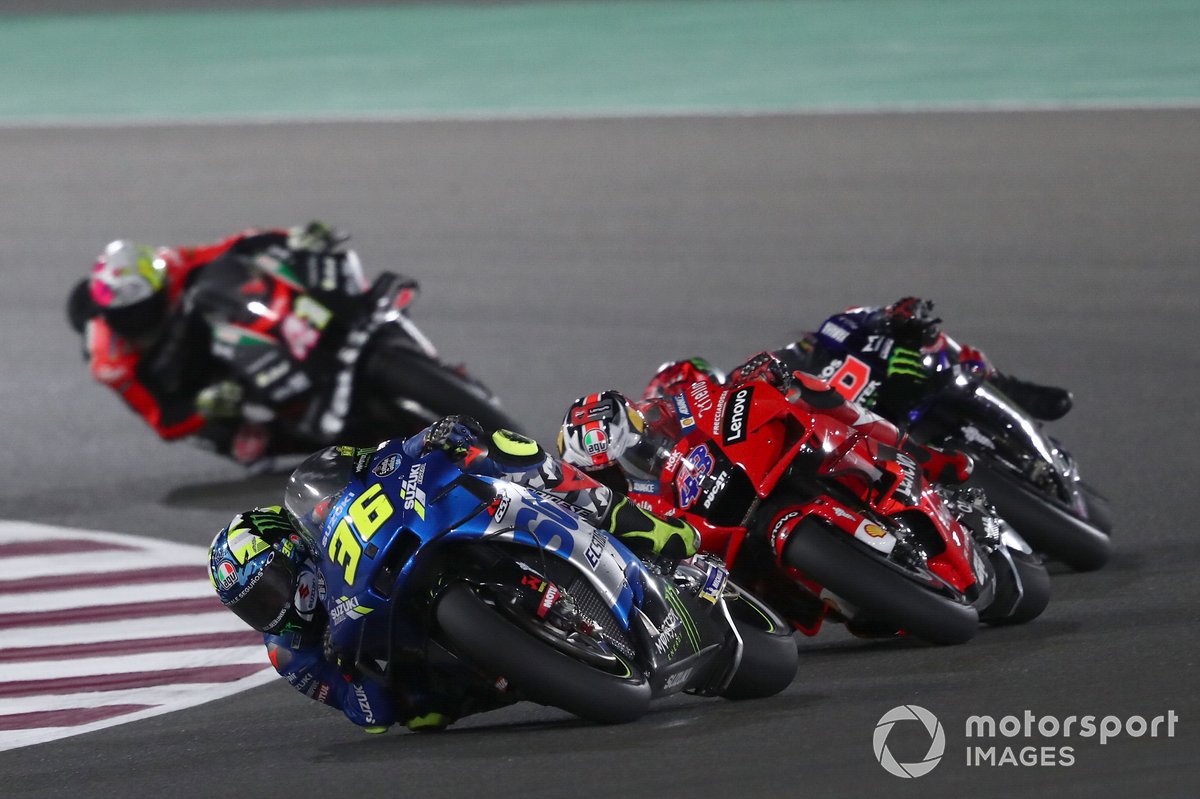 He did it in his own way, with the formula he worked so hard on in 2019, the year of his debut in the premier class, and which brought him so much profit last year: Mir's lap-by-lap analysis from Sunday shows he was the most consistent of the whole grid, with all the laps except the last one in the same second (1m55s).

It was consistency not even race winner Maverick Vinales was able to maintain, although in the Yamaha rider's case he probably eased at the end, given the advantage of more than 1.7 seconds he had in his favour.

Mir crossed the finish line on the first lap in 10th, 2.3s behind Bagnaia, the early race leader.

And 21 laps later he crossed the chequered flag in fourth, 1.4s behind Vinales. In those 21 laps, the Suzuki rider not only reduced the gap to the front of the pack by nine tenths of a second, but also overtook six riders along the way.

The only point of bitterness was being left out of the podium positions, due to the tremendous difference in top speed between his Suzuki and the Ducati of Zarco and Bagnaia.

To try to avoid a repeat of that this weekend in the second Qatar race, Suzuki's technicians have been working for days on a plan to ensure that their riders arrive at the final metres of the race with enough distance to avoid being at the mercy of the Desmosedici's enormous speed, which in the free practice sessions set a new absolute record of 362.4km/h courtesy of Zarco.

As it is obviously impossible to compete with the propulsion of the Ducati, Suzuki's strategy is based on two points.

The first is very obvious: "We have to improve the lap time to get further forward on the grid, which is something we have been focusing on for months," Mir's data engineer Claudio Rainato told Motorsport.com.

"For this season we want Joan to start regularly from the second row." Mir joked on Sunday that it appears he's "comfortable" coming from low down the order, but is keenly aware of the importance Saturday's now in MotoGP. 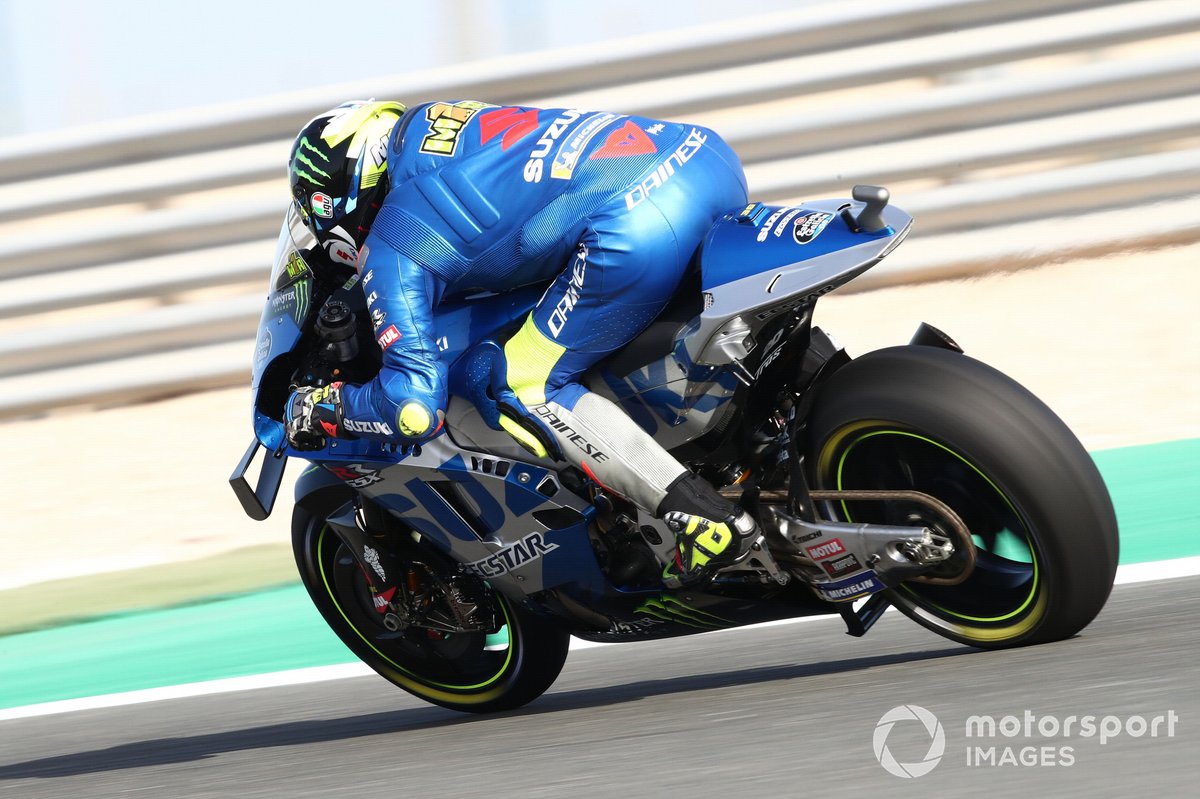 A key asset of the Suzuki is its ability to manage tyres well, with Mir's crew chief Frankie Carchedi noting his rider will need to push his rubber a little more this weekend.

"And then there's trying to push the tyres a little bit more, because I think there was still a little bit of margin left," Carchedi said.

"That was the key to Sunday's race. And that's why we had focused a lot on that point during the pre-season."

Rainato is not so sure how much more Mir could have pushed his tyres without getting into trouble, adding: "The limit of the tyres was not very clear, and if you took a gamble it could have gone wrong, as it did for some riders".

Carchedi notes his comments are based on 22-laps worth of data on the tyres coming back to the team post-race, and admits there was a risk Mir could have gone over the limit – but remains firm in his stance on the area Mir needs to work on most this weekend.

"We have that information now that he completed the 22 laps, but not before," Carchedi concludes.

"If he had pushed harder, he would have been gambling. But yes, I think he could have pushed a bit harder."

All things considered, Mir's title defence got off to a better start than he likely anticipated pre-race.

And the fact Vinales on his Yamaha was able to stamp his authority over Ducati on a circuit best-suited to the Desmosedici will be a fact Mir has not overlooked coming into the Doha GP.

Doha GP ‘not a must-win’ for Ducati MotoGP rider Miller