Francesco Bagnaia has explained that he bettered his braking style on the Ducati MotoGP bike in 2021 by studying three-time world champion Jorge Lorenzo’s data last year.

Across his third season in MotoGP, Bagnaia has impressed many with his cornering ability on the GP21 and his braking – with Pramac’s Johann Zarco believing Bagnaia is the one making the difference on the Ducati into corners, rather than the bike.

Braking was a weak area for Bagnaia in his rookie campaign in 2019, but the Italian says working with his Panigale V4 street bike on Michelin’s endurance tyres at Misano throughout 2020 and studying ex-Ducati rider Lorenzo’s data has helped him to mould his braking style.

“It’s something that I worked a lot on, because in the first year in MotoGP I was struggling a lot with the braking,” Bagnaia explained after his Misano victory.

“And I started working a lot on that area in the last part of 2019.

“In 2020 I was already doing a step, but I also worked a lot with a street bike here [at Misano] to manage the better the front tyre, because one good thing about our Panigale in terms of riding style and in terms of tyre, because the tyres we are using is the Michelin endurance tyre, the construction is very similar.

“So, what the front is doing is close I think [to the MotoGP bike].

“So, now the difference I make is just the last part of the braking. I’m braking as hard and as strong as I can, but I’m making the difference in entry I think.” 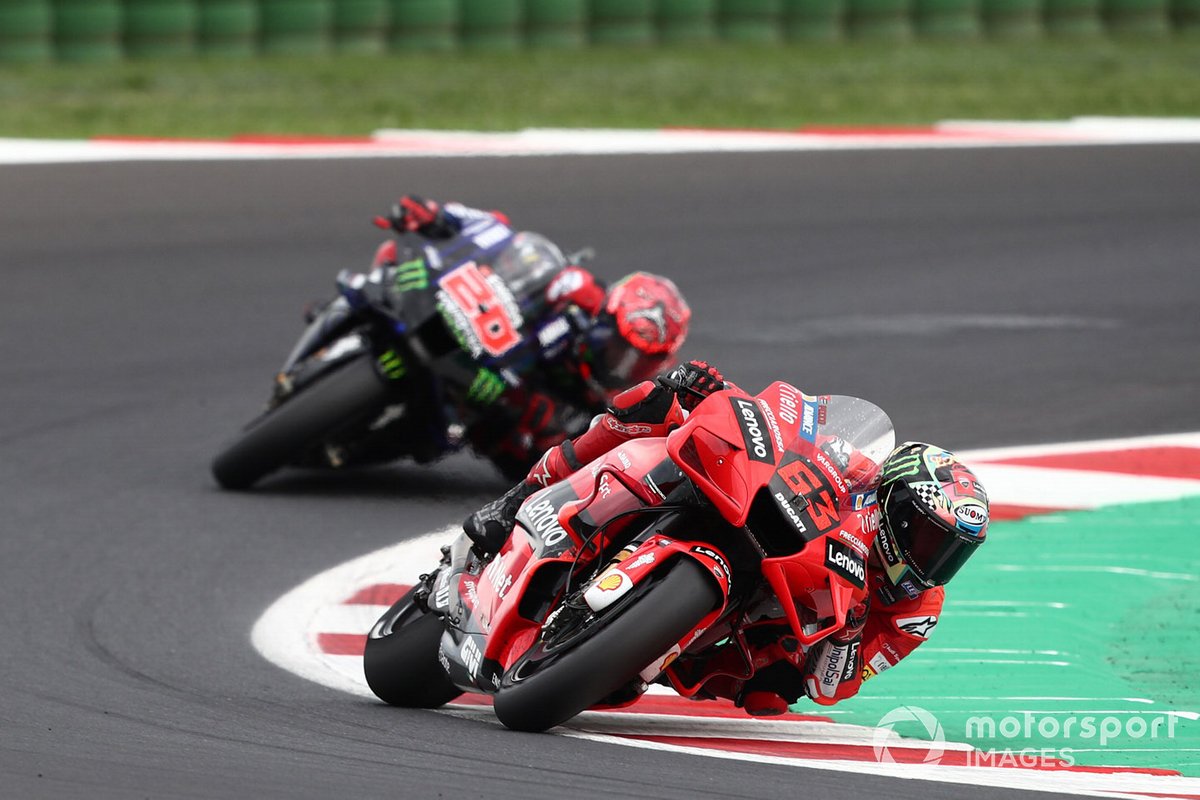 Quartararo noted that he was struggling to keep up with Bagnaia in the latter stages of the Misano race due to the Ducati rider’s speed through the fast sequence of right-handers at Turns 11, 12 and 13.

Explaining how he is able to corner so well here, Bagnaia said: “The good thing about this bike is that it’s very stable, so in those fast corners we can enter with a lot of speed and our bike is not shaking a lot.

“So, I feel very great in fast corners, in all the circuits we have.

“And also, I have a really great feeling with the front, but starting from this year.

“Before I was struggling a bit more. This year the feeling I have with the front is incredible.

“We didn’t change anything on the bike, the setting is very similar to last year.

“But the feeling has grown a lot and I improved a lot how to manage the front tyre, so the feeling is great and it helps me to enter into the fast corners like this.”