The final Moto GP race weekend of 2012 got underway on a wet Circuit de la Comunitat Valenciana Ricardo Tormo in Valencia, Spain today and the slippery conditions saw some unsuspecting names at the top of the timing sheets. The afternoon’s FP2 session was worse than FP1 this morning and while Nicky Hayden came out on top in FP1, it was the CRT Power Electronics Aspar machine of Randy de Puniet who rose to the top this afternoon.

Riders will be hoping for much better weather in tomorrow morning’s FP3 session and the qualifying session in the afternoon but with weather forecast not certain of dry weather, most of the teams will be planning a wet race strategy for Sunday’s GP Generali de la Comunitat Valenciana. The weather didn’t seem to bother De Puniet this afternoon though with the Frenchman recording a fastest time of 1m 36.965s with the San Carlo Honda Gresini CRT of Michele Pirro in second with a best lap time of 1m 37.084s and Hayden in third (1m 37.389s). 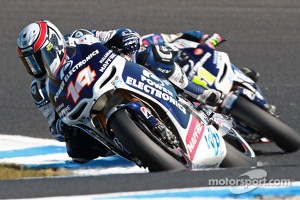 Karel Abraham set the fourth fastest time this afternoon (1m 37.782s) on his Cardion AB Motoracing Ducati GP12 while Valentino Rossi sits in 5th on the timing sheets in this, his last race weekend as a factory Ducati rider with the seven times MotoGP World Champion setting a best time of 1m 38.115s. Danilo Petrucci set the 6th fastest time this afternoon for the Cam IodaRacing team (1m 38.300s) with Ivan Silva 7th for the Avintia Blusens (1m 38.304s).

Roberto Rolfo ended day one in 8th on the Speed Master machine with a best time of 1m 38.905s while Paul Bird Motorsport rider James Ellison sits in 9th with a fastest lap of 1m 39.837s. Hiroshi Aoyama has been drafted in from World Superbikes to fill in on the Avintia Blusens seat currently vacated by Columbian injured rider Yonny Hernandez and Aoyama managed the 10th best time of 1m 40.497s. Claudio Corti finished day one in 11th for the Avintia Blusens team with a best lap of 1m 42.993s. 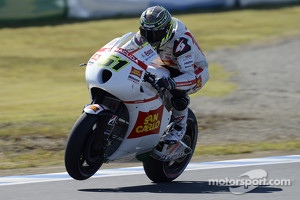 Yamaha Racing has slow start to season finale in Valencia