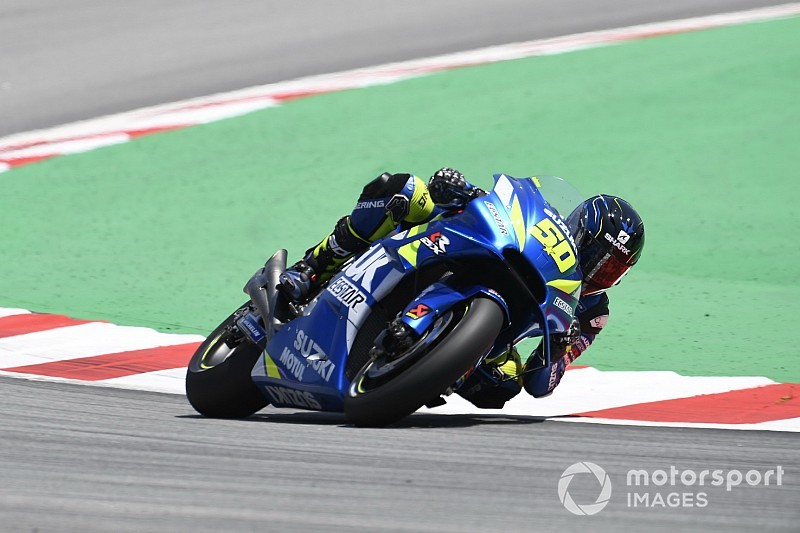 Suzuki MotoGP test rider Sylvain Guintoli says the current version of the GSX-RR bike owes a lot to the “countermeasures” developed by the team during its torrid 2017 campaign.

The Hamamatsu firm's 2017 bike was not competitive for much of that season, and the team believed it was hampered by having homologated the wrong specification of engine – with its then-rider Andrea Iannone said to have played a big role in the mistake.

Suzuki then returned to the podium the year after, and has made further steps since, with current lead rider Alex Rins having placed in the top six in 13 of the past 14 races, and taking the marque's first MotoGP win since 2016 during that run.

Speaking in Barcelona, Guintoli pinpointed the 2017 season as the turning point that led to Suzuki's current strong form.

“It's been step by step,” he said of Suzuki's progress. “I mean, the first massive step was in 2017, when we identified what was not right. And after that, we worked during the season on different countermeasures - because we couldn't change this ['frozen' engine spec] - so we worked on countermeasures to try and be competitive towards the end of the year, which we started to be, in Phillip Island, Valencia, that was the end of '17.

“And then after that, in '18 the bike was straight away better, and all the work that's been done in the second part of the year to counter that problem, that then became very useful, and then it started to work with a bike that was better-born.

“So, all of this work, and sometimes the struggles, they make you stronger when then you struggle less. And all of that experience I would say is just paying off, at the end of last year already, and then this year.”

Guintoli said the 2017 slump “inspired everybody in the team” and helped “create a really strong team unit” at Suzuki.

“It's in the difficult moment, you just crumble or you stick together, and in these moments the team had a great attitude, and it's paying off now.

“Now most weekends it's all smiles and the guys are competitive so it's nice to see.”

While it's lacked top speed and hasn't always performed over a single lap, the current GSX-RR has impressed many of Suzuki's rivals with its cornering and its ability to extend tyre life.

“Sometimes I feel a bit embarrassed because lots of people come to me and say 'ah, it's great, you're doing great!',” Guintoli said.

"I think, it is good - it's nice to be a link in the chain. And for sure the work we're doing with Tom [O'Kane, crew chief], and the test team is now like a proper entity in the team, it just works like a race team.

“So we're able to really do some efficient work and it's nice to be part of it, but most credit goes to Suzuki and especially to our young guns [Rins and Joan Mir] that know how to turn the throttle.”