KTM rider Pol Espargaro says he had to ride in the German Grand Prix at the Sachsenring as if he was on a "dirt track" due to an unusually high amount of tyre degradation.

Espargaro qualified promising eighth at the Saxony track, but couldn't stay in the top 10 in the race and finished 12th, his second-worst result of the season.

He said that he was sliding so much that at the penultimate corner of the track he felt like he was riding on a "dirt track", and that his tyre only lasted half the 30-lap race distance.

"It was something not normal in our bike. I don't say that it is a Michelin problem, but it is something that we have done not good.

"But then, after lap 20, the tyre was completely done, super degradation, nothing on it."

Espargaro highlighted that Hafizh Syahrin, the only other KTM finisher in Germany as both Johann Zarco and Miguel Oliveira crashed out, faced similar issues.

"It worries me because also Syahrin had very similar problem which is not normal because is another KTM," he said.

"It was something very rare, not normal for sure, not normal progression of wasting of the tyre. We will need to study what is going on.

"The thing is, that it was not due that I was just smashing the tyre, and burning the tyre because we check the data of the tyre and the temperature was very constant during all the race which helps a lot the tyre to stay constant on grip until the end.

"But even like that we lose the grip too early in the race compared to the others, to my brother [Aleix] on the Aprilia or for sure Suzuki, they have a huge grip or even Ducatis, they had the drop but not as much as us."

Espargaro's teammate Zarco crashed at Turn 3 on the third lap, the Frenchman also reporting lack of stability with his KTM.

"The beginning of the race, it was not possible to too much keep the bike stable overall on the brake because of this low grip level," said Zarco.

"I was controlling and try to not do too many mistakes and even like that it's a shame, in Turn 3, coming to the corner and maybe too much leaning. I have closed the front, Oliveira did it just the lap before.

"It was limit and it is shame because I was in the points that was the target and I really was thinking that the pace can be constant all the race." 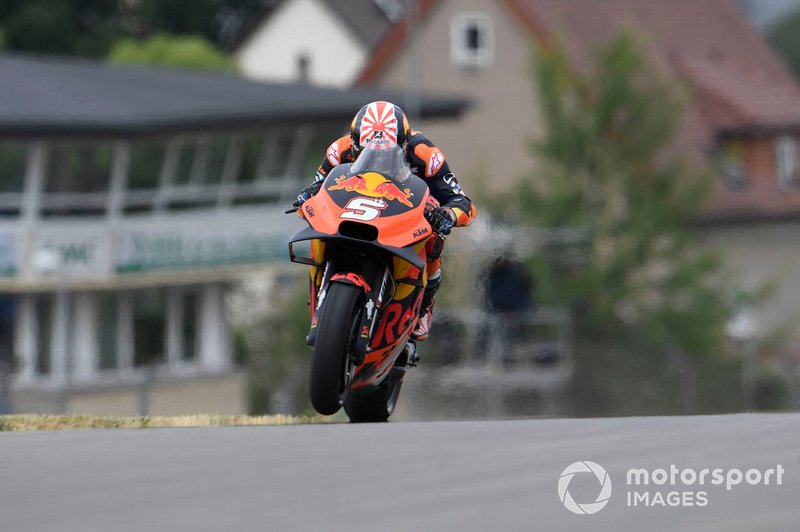 Rossi: I can't blame my age for current slump