Espargaro in Twitter spat with Pramac over Petrucci clash 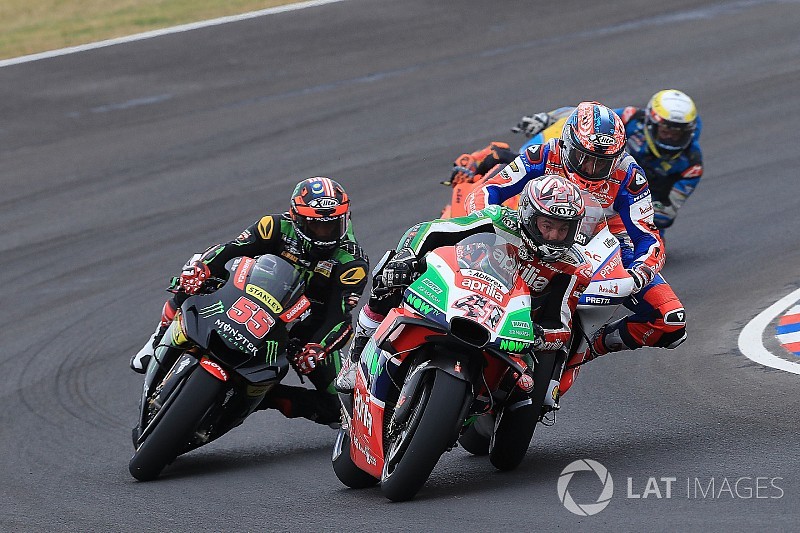 Aleix Espargaro has entered into a war of words with the Pramac Ducati MotoGP team over an attempt to defend Danilo Petrucci's riding in last weekend's Argentine Grand Prix.

Aprilia rider Espargaro was critical of Petrucci in the aftermath of the Termas de Rio Hondo race, saying the Italian deserved to be penalised in the same way as Marc Marquez, who was ordered to drop one position after clashing with Espargaro at Turn 13.

"Petrucci hit me at Turn 2 at least as strongly [as Marquez], or more, and we have a million cameras on the bike, so I do not think it is so difficult to assess and see these actions," Espargaro said.

"Marquez's sanction seems fair to me, but it's not fair that Petrucci has not been sanctioned when he hit me harder. I do not think the job of Race Direction is so difficult."

Espargaro clarified the contact with Marquez or Petrucci was not what was responsible for ending his race in Argentina, as his RS-GP suffered an electronics problem.

On Tuesday, Pramac issued a short statement to say it was "disappointed" that Petrucci's riding had been likened to that of Marquez or Johann Zarco, who were respectively involved in incidents that ended the races of Valentino Rossi and Dani Pedrosa.

"The contact between Petrucci and Espargaro did not cause any consequences for the continuation of the race of both riders, but is nonetheless being considered in the same way as the contact that saw  Zarco and Marquez oust Pedrosa and Rossi [respectively] from the race.

"Petrucci himself was touched by [Hafizh] Syahrin on the last lap, having to widen his trajectory and allow Andrea Iannone to pass."

In response to the statement, Espargaro tweeted: "He hit me harder than Marquez did! Bulls**t! The picture is there, don't lie everybody! [Petrucci] is always riding like this!"

"[Petrucci] has been softer than you with Dovizioso [in] Argentina 2017!", he wrote. "You stop bulls**t and try to [voice your opinion] in the Safety Commission, not on Twitter."

Espargaro tweeted in reply: "You are nobody to tell me what I have to do! And yes, I made a big mistake with Dovi, and I apologised to him. I didn't say bulls**t and lie [to] the people as your team is doing!"

Pedrosa in doubt for Austin after undergoing surgery