Aleix Espargaro says the long lap penalty loop at Silverstone is “a joke” but insists he is not sour about this in regards to Fabio Quartararo serving his on Sunday.

By:
Megan White
Co-author:
Lewis Duncan
Listen to this article

The Yamaha rider will take the penalty after crashing with Espargaro during the Dutch TT at Assen while trying to overtake his championship rival last time out.

But the Aprilia rider, who sits second in the standings and just 21 points adrift, says riders lose “just eight tenths” taking the penalty at Silverstone compared with “3.2s in Barcelona.”

Espargaro said: “It’s a joke. I don’t mean to complain about the long lap because it looks like I’m saying it because my rival has to do a long lap penalty.

“We have to be more professional on this. The long lap is a soft penalty, I like this penalty. It’s a show, it’s nice.

“But if they say it is three seconds, it has to be three seconds everywhere. If in one place it’s 2.5s, it’s ok. But eight tenths, it’s ridiculous. But it doesn’t matter.

“Even if it was two seconds, Jack [Miller] proved this year [at Assen] that you can do a long lap and fight for the podium. So, [I] imagine Fabio [can do the same].” 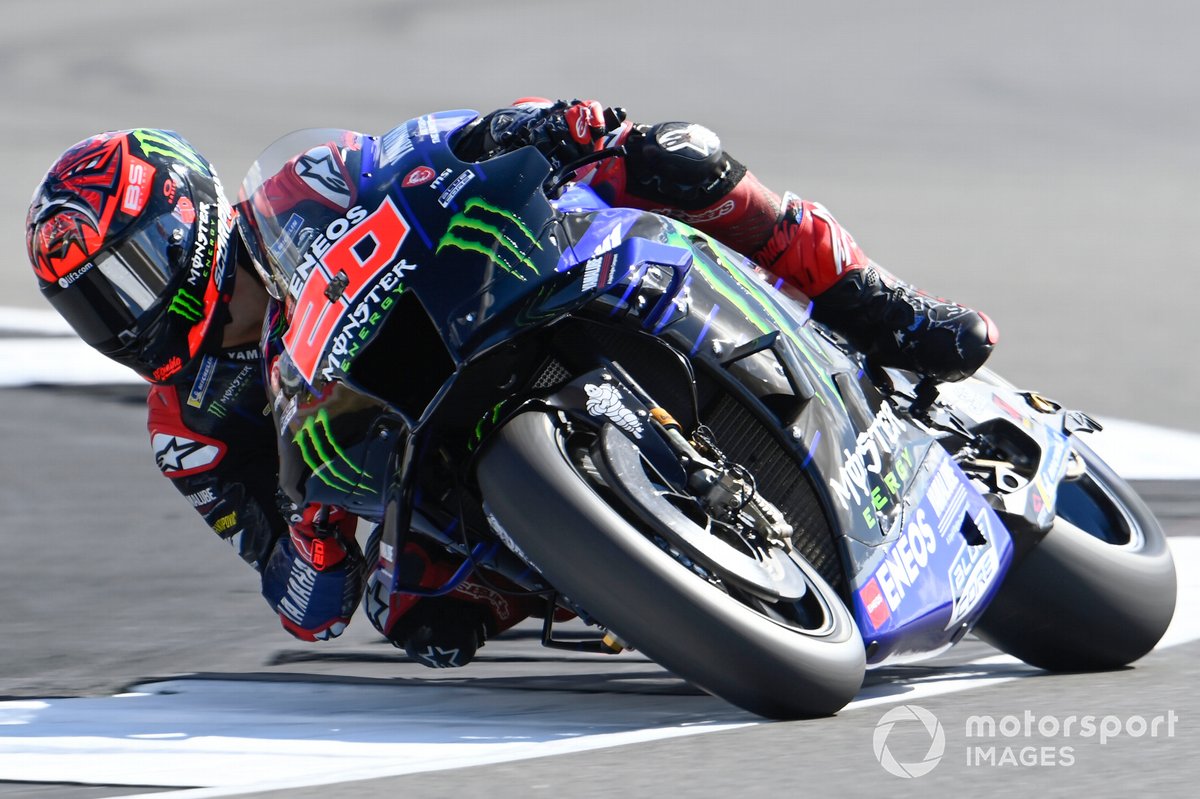 The Aprilia rider, who finished fourth at Assen despite the crash, said he “doesn’t think it’s that difficult to make a proper long lap penalty.”

He added: “You see this long lap penalty one metre out of the track on the proper layout.

“It’s easy to do a long lap penalty, but I don’t know what they did [here at Silverstone].”

Despite his complaints, Espargaro said the long lap is “better for the show” and “a nice invention” as it was brought in to lower the need for costly ride-through penalties for minor infringements.

“We have to remember that this is a show, and it’s nice to have a long lap penalty,” he said.

“We make a lot of noise about the long lap penalty. It’s nothing in the end. I think it’s a good penalty.

“In the past you did a false start, you had to do a ride-through and the race was a disaster.

“Now you do the long lap penalty, you put on a better show. It’s nice, I think it’s a nice invention.

“But we have to be serious with the long lap penalty. I don’t think it’s that difficult. Somebody comes with a Superbike, tries its. If it’s fast, make it tighter. You can half a second difference, but not 3.2s in Barcelona to 0.8s here.”

Silverstone MotoGP: Espargaro edges out Martin by 0.028s in FP3