Pol Espargaro says rumours of him being ousted by Honda at the end of 2022 are "fake news" and says he is "not worried" about his MotoGP future.

The 2013 Moto2 world champion joined Honda last season on a two-year contract and was expected to remain in the seat for 2023.

However, Suzuki's shock decision to quit MotoGP at the end of 2022 – which was officially confirmed on Thursday ahead of the French Grand Prix a week after Motorsport.com's first reports – has seen the rider market shift towards a likely tie-up between Honda and 2020 world champion Joan Mir.

While Mir denied any direct links to Honda on Thursday at Le Mans, Espargaro point-blank ruled out any speculation of him being ousted by Honda for 2023.

"Well, there's two ways of calling this: rumours or fake news," Espargaro, who sits 12th in the standings ahead of the French GP, said when asked by Motorsport.com to comment on his 2023 plans.

"We live in a world where we are more and more surrounded by fake news.

"It started with an Italian journalist [who said something] that Alberto [Puig, team boss] told me something after the race [at Jerez]. This is not true, it's fake. But as we are seeing with the politics all around the world with the fake news, it's difficult to control.

"A bad journalist can do this. So, at the end of the day what I tell you is till it's official I will not comment rumours.

"Rumours are rumours, fake news is fake news. I will be here till Valencia, when it's official we will talk about it."

But when asked if he was worried about his future, Espargaro said his concerns were no more than usual, while highlighting the fact he has had a fulfilling career.

"If not, I'm going to be a team manager or whatever. I don't know. I've had an amazing sporting career whatever is going to come.

"Hopefully it's going to come as a MotoGP rider again. But if not, I had an amazing career, I've fought with the best riders in the world for many, many years.

Mir's manager Paco Sanchez says no contract has been signed with Honda, or with any manufacturer yet, but says he is engaging in discussions with all factories.

Sanchez revealed at Le Mans on Thursday that Mir's "priority" was always to continue with Suzuki, but has now engaged in discussions – with some meetings to take place this weekend – with marque's he feels are worthy of Mir's talent.

He also says there is no rush to secure something and will negotiate terms for Mir as if Suzuki wasn't quitting.

"The priority of Joan has been always trying to renew the contract with Suzuki," Sanchez said. 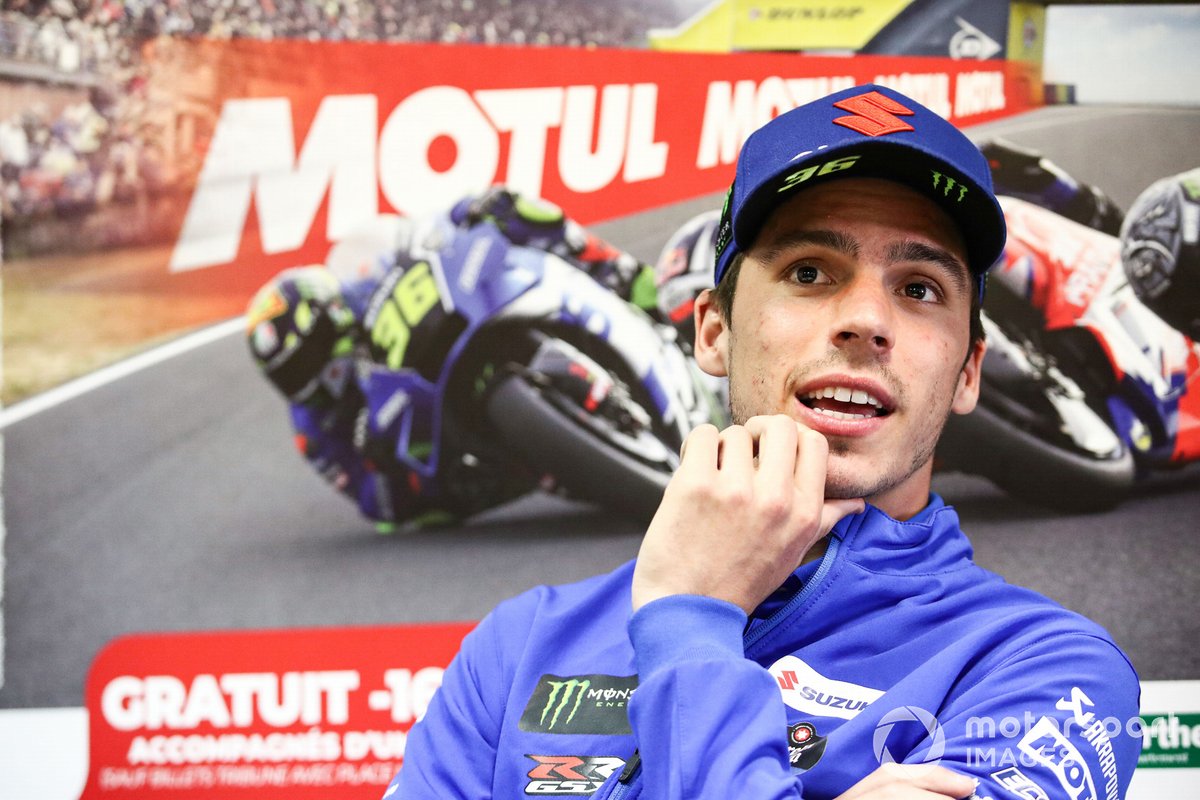 "So, we've been trying to renew the contract with [Shinichi] Sahara-san, and later with Livio Suppo when he arrived, from the October of last year.

"So, they know that Joan would like to renew and for us we have no doubt that they will extend the contract of Joan. So, our position was comfortable.

"We were waiting because Livio has arrived in the last moments, so we understood Livio liked to close this matter.

"I didn't call everybody because it was no sense. I'm not interested to go to Tech3, or to go to Pramac.

"My priority is to find a factory bike. So, I have been in contact with all of them, we have some meetings here. I will try to close something as soon as possible, but we are not worried, we are not in a weak position to say 'we have no work, please give me any contract'.

"For me it's 'you like Joan, he is a world champion, I think his potential is high in every bike.

"'So, if you like him we are open to negotiate, but in normal conditions – not taking into consideration Suzuki is leaving the championship'.

"We have some meetings here, but I cannot say more. I have a great many journalists saying we have signed with Yamaha, or Honda – all of this is absolutely false, completely false.

"We could be close to sign with one of them, yes we could be. But in my world I'm a lawyer, the contracts are either zero or done.

"It's 100% or nothing. We were so close to sign with these people, and now we are in the shit.

"Every day the things can happen. Tomorrow Joan could have an accident here riding, we don't have anything signed. We have nothing, he has a big injury, we have nothing. This is the truth, so we will see.

"I will keep more or less my same conditions as we had with Suzuki. This is our priority.

"If not, Joan will go home. He will not ride here for zero or these shit contracts that now KTM, Ducati are offering their riders.

"I have another rider in MotoGP – Remy – and I know how shit his contract is. Remy accepted that, but for Joan it's unacceptable."

Sanchez also confirmed the initial offer Suzuki made Mir in Portugal last month was "unacceptable" and was for less than his first contract in 2019 when he was a rookie.

"The first offer was an unacceptable offer in Portimao," he said.

"During the last year, and at the start of this year, we have been talking to keep the conditions that he had.

"And Sahara-san said 'we are interested, Paco, don't worry, you know the Japanese'. And it's true. We took months to sign a contract with Davide Brivio [in 2019] the first time.

"We spent six or seven months before we signed the contract. So, I know these people are really slow to make documents.

"Joan was happy because he's happy with the team, with his performance because they improved the bike. Now everything was perfect. Suddenly this has changed.

"Why? I think it was a decision made by people who don't have passion for MotoGP. It was made by people in a suit in a chair in Japan – they never came here.

"They are not worried about the people who work here. For me it's shit because everyone here is professional. They made with a really small budget really great results. They don't merit to be in that situation."

Should Mir end up at Honda, he will go up against six-time world champion Marc Marquez. But when asked what he felt about that challenge, Mir said: "You go now and ask any rider if he wants to be a team mate of which I'm sure he's the best in history. What you can learn from a guy like that is huge."