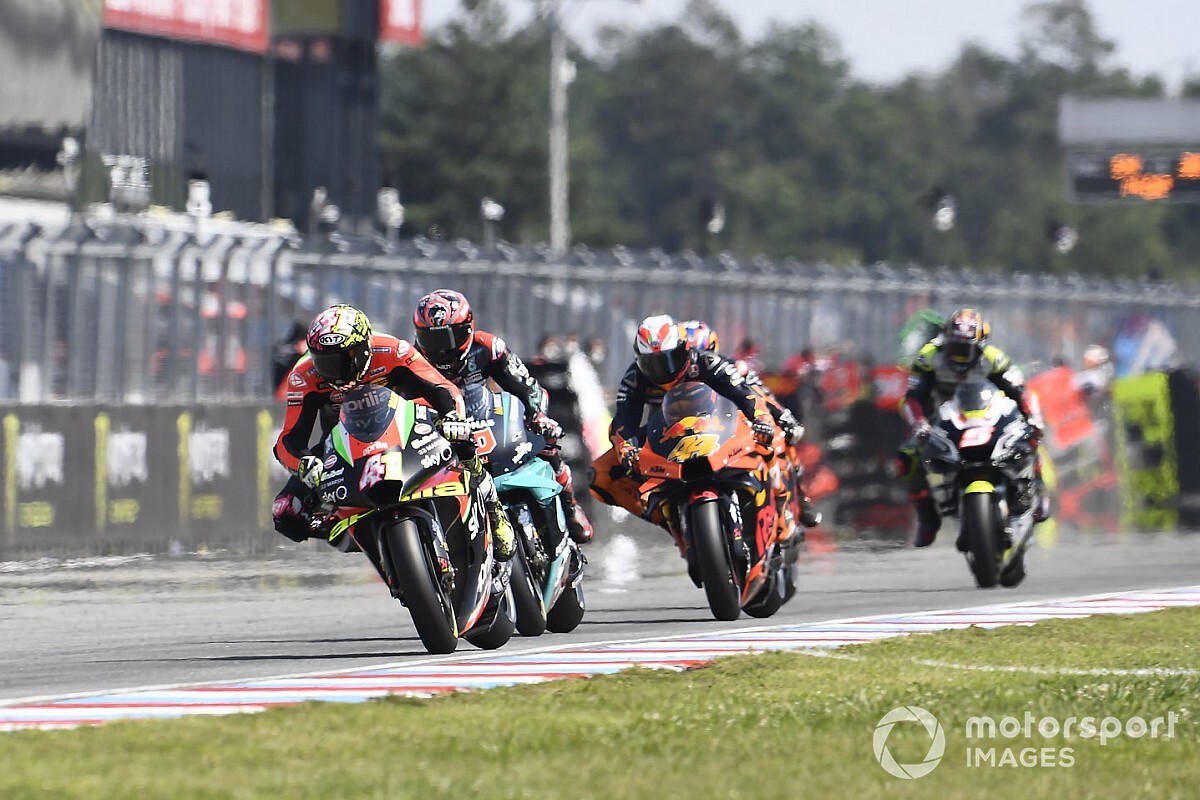 Aleix Espargaro was “very disappointed” to be 15 seconds away from KTM winner Brad Binder in the Czech Grand Prix, as Aprilia has been in MotoGP two years longer.

Rookie Binder took a sensational maiden victory for himself and KTM last weekend at Brno, while Espargaro was 15s back in 10th having run as high as second in the very early stages.

Aprilia returned to MotoGP in 2015 (though it wasn’t till 2016 it built a proper prototype, having raced a glorified RSV4 in its first season) while KTM joined the grid in 2017.

In that time, KTM notched up its first podium in 2018, its first dry front row start in 2019 and is now a race winner, while Aprilia’s best result remains a sixth in dry conditions.

The new RS-GP is a radical overhaul of its predecessors, and Espargaro admits it’s “the best bike” he’s ever ridden – but doesn’t feel Aprilia’s results aren’t up to standard for a brand with a successful history in the lower categories.

“Obviously, the new bike is better,” Espargaro said. “That's clear. [But] looking, the strongest guys on the field in Brno were the three KTMs. So, this makes me be very disappointed.”

When asked by Motorsport.com if his disappointment was a result of KTM achieving this result in a shorter space of time to Aprilia’s return to the class, he added: “Yeah, this is the truth.

“KTM arrived later than us. And the only thing we can do is applaud them because they are doing a great job with completely different mentality than the rest of the brands with their own chassis system.

“And the level they show last year with Pol [Espargaro] was already one really good step and this year, with Pol and Binder, they are very, very strong.

“And trying and trying, working super hard, putting everything I have in this project with Aprilia, but for the moment the reality is that we are not at the level that I would really like to be and also Aprilia want to be.

“I think Aprilia, a 54-times world champion [across all disciplines] deserve and have to be fighting for the for the top five after six years in MotoGP class. But for the moment we are still far.

“I have to say that this year it felt better, it's I will say that is the best bike I ever had in Aprilia, but not enough yet.”

KTM has invested a lot into its project, and has taken profit of the testing concessions afforded to it and Aprilia with regular private outings – including on Monday at Brno with its test and race riders.

Espargaro suggests Aprilia has to try to follow this, but concedes Aprilia having to call on main test rider Bradley Smith to fill in for the banned Andrea Iannone has complicated matters.

“There is no secret in this world. The more you invest, more you work, the more success you have.

“So I hope that we learn about them and we can be much more competitive next year.

“I know Aprilia is trying, many things are changing. But with the problem we had with Iannone, everything has been more difficult for us.

“Aprilia invested a lot this year with the test team, we had two riders on testing with [Lorenzo] Salvadori and Smith. But Smith is now racing.

“So, the situation in Aprilia is a little bit more tricky, but it's not an excuse.

“It's not an excuse at all, because it's not our first year. So, I hope that for the future we can learn.”