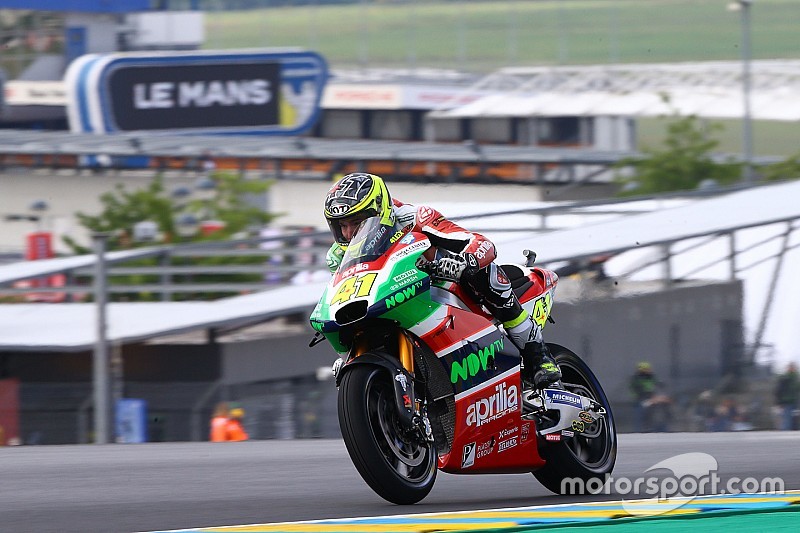 Aleix Espargaro admits his 14th place in the MotoGP standings after five races with new employer Aprilia is a “disaster” compared to the Italian marque's potential.

Espargaro joined Aprilia from Suzuki for 2017, riding an RS-GP that has improved considerably since it was introduced at the start of last season.

While the package still lacks in acceleration, its trait of not working the rear tyre too hard helped Espargaro charge to sixth in the Qatar season opener, right behind Honda pair Marc Marquez and Dani Pedrosa.

However he subsequently crashed out of the Argentina race, struggled with his front tyre at Austin and finished ninth at Jerez.

A return to the top six was on the cards at Le Mans before Espargaro suffered an engine failure while closing on Jorge Lorenzo, leaving him 14th in the points.

Asked if the failure was a price of Aprilia’s development efforts, Espargaro said: “It is possible, but we are a factory and we need to work as a factory.

“I think we are doing great things. The championship position is really a disaster, but apart from America race we were always fighting for top eight, top six, which is great but just not the best luck.

“I was five seconds behind Lorenzo [mid-race] and when the engine stopped I was just one second from him, so it’s a shame because we could have put again in the Aprilia in the top six.”

"No regrets" over choosing Aprilia

Led by Tech 3 Yamaha rookie Johann Zarco - who grabbed his maiden podium at Le Mans - in fifth place, seven satellite riders are currently ahead of Espargaro in the standings.

However the Spaniard says he is happy with move, and the project’s trajectory.

“This was my decision, my decision was to join Aprilia,” he said. “I put everything I had in my hand, I'm working more than ever in my life, more focused than every in my life.

“I spend a lot of time with my Marco [Eschenbacher], my crew chief. We do a lot of meetings after every session to try to improve the Aprilia and I'm happy with the decision I take.

“Maybe, if I was on a Tech 3 bike or a satellite Ducati I would be fighting for the podium.

“But I had the option and I choose Aprilia, so no regrets. Happy overall with how the things are going, but obviously we need a little bit more luck.”

Crutchlow: Pedrosa would have crashed had I hit him