Ducati has edge over Honda at Aragon - Crutchlow 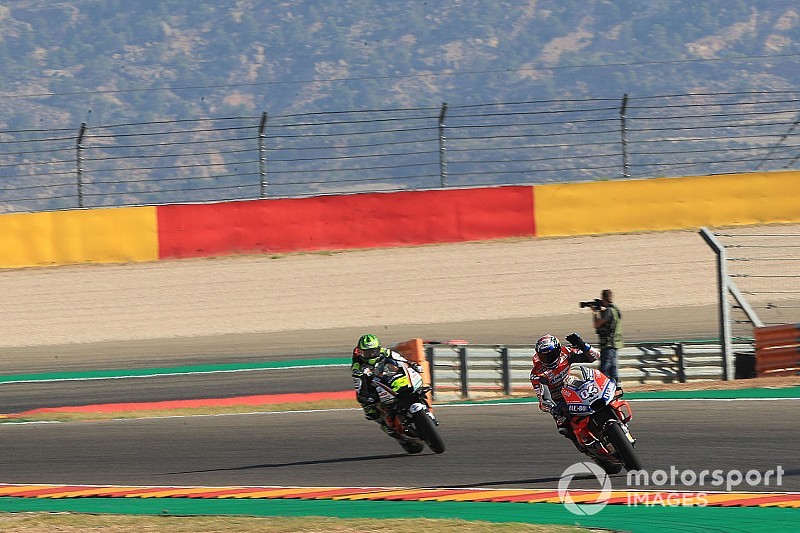 Cal Crutchlow feels Ducati has a small edge over Honda after the opening day of MotoGP's Aragon Grand Prix, mainly because of the Italian manufacturer's recent test at the track.

Unlike Honda, Ducati arrived to Aragon having recently completed a private test at the track, and it locked out the top four in the morning's opening practice session, led by Andrea Dovizioso.

Marquez, nearly eight tenths off the pace in FP1, recovered to top the afternoon session, with Jorge Lorenzo and Dovizioso completing the top three.

The aforementioned trio have dominated in the past three races, and Crutchlow feels the victory will be decided among the same three riders at Aragon as well, but currently sees the Ducatis with a small edge in race pace.

"I think we need to improve in some areas, and Ducati has a little advantage over us still, because they tested here", said Crutchlow, who was fourth in FP2.

"Lap-by-lap they seem to have better pace than us. Hopefully, we can progress, normally from Friday to Saturday we make quite a big jump. So we’ll see.

"I think Marc has the biggest chance of winning on Sunday, along with two Ducatis. I have a strong pace as well, but we know this is Marc’s favourite circuit and he goes very well here.

"The Ducatis have tested here, so they have the information to be able to go fast. I don’t know who is the favourite but I’d say it’s one of those three."

Crutchlow added that Honda's big issue with front tyre management: "You know you’re in trouble when the other guys are using the hardest front tyre. Honda is really in trouble.

"If you were to see the softest front tyre I used this morning after 10 laps, and then Dovi kept his the whole session, and did a fast lap with a new rear tyre. We can’t do that."

While Marquez did not fully echo Crutchlow's complaints, he admitted that tyre management is "difficult" for him.

When asked if the tyre selection for the weekend is too soft, Marquez said: "No, we have hard tyres, we have enough hard tyres.

"Of course it is one of the tracks that is more demanding for the rear tyres, especially the left side because long corners we can slide.

"We try to manage going in that direction but we need to understand a few things, still we need work because with one tyre, the other one, the drop is there and is difficult to manage.

"Looks like Ducati and Yamaha, they have more information because they test here. We are trying to analyse all the performance from different tyres and try to choose the one for Sunday."