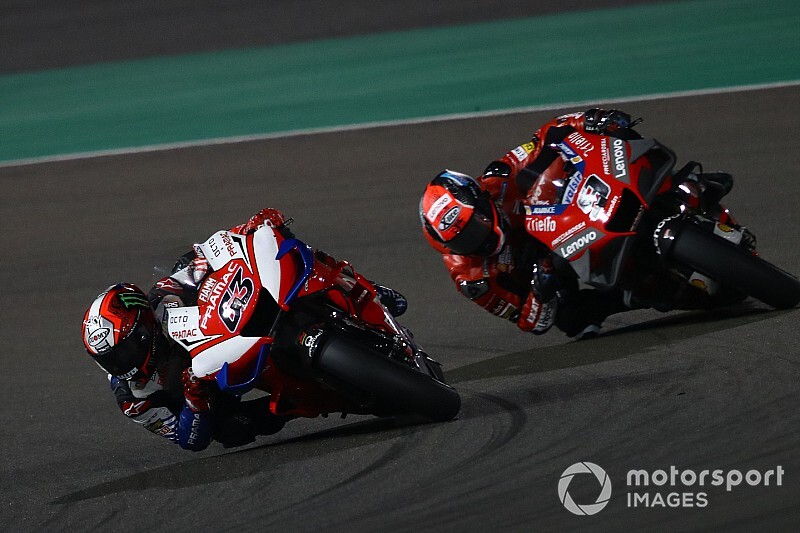 Ducati sporting director Paolo Ciabatti says the Italian marque will not look outside of its existing roster of factory-contracted riders when deciding on its 2021 line-up.

Both Andrea Dovizioso and Danilo Petrucci’s contracts with the works Ducati squad are up at the end of the year, but the manufacturer's’ preferred alternatives Maverick Vinales and Fabio Quartararo both signed for Yamaha at the start of the year.

Ducati was also understood to have been keenly pursuing Joan Mir, though the 2017 Moto3 world champion is set to remain with Suzuki.

Speaking to Motorsport.com, Ciabatti says its current factory line-up, as well as Pramac riders Jack Miller and Francesco Bagnaia and Avintia’s Johann Zarco – all of whom are directly contracted to Ducati – are the five riders it is looking at for 2021.

“We have a rider like Andrea Dovizioso, who has won the most races aside from [Marc] Marquez in recent years and is the only one who has been able to seriously challenge him for the world title,” Ciabatti said. “I don’t think he can or should be doubted.

“It is true that a few days ago he turned 34, but it is an age that a fit rider allows you to look ahead two or three years no problem.

“We have Petrucci, who went very well in the test in Qatar. One of the reasons we were sorry that we could not race is precisely our belief that Danilo could have expressed himself at a high level. He was the only one to do a full race simulation and did it with very quick laptimes.

“We have Miller and Bagnaia at Pramac, who are two young riders and who are among the best talents there are today in MotoGP.

“I would say we have five riders who have expiring contracts with Ducati, but who have a very close relationship with us. So we will reasonably look to them to understand what our 2021-22 set-up may be.”

Asked if there were any talents in Moto2 Ducati was keeping an eye on, Ciabatti added: “We have been following some young Italians for a long time.

“Certainly, Enea Bastianini is a rider that we are following, even if in recent years he has not had the form that could be expected.

“[Lorenzo] Baldassarri last year had a spectacular start to the season, then got lost. This year, in the only race we have been able to see in Qatar, he did a great job.

“We always have an eye on Moto2 and Moto3, but I believe for 2021 and 2022 we will make choices among the riders that I mentioned, even if we haven’t made any decisions yet.”

Crutchlow: No reason to think I'll retire this year

Avintia in the "red zone" amid enforced MotoGP hiatus