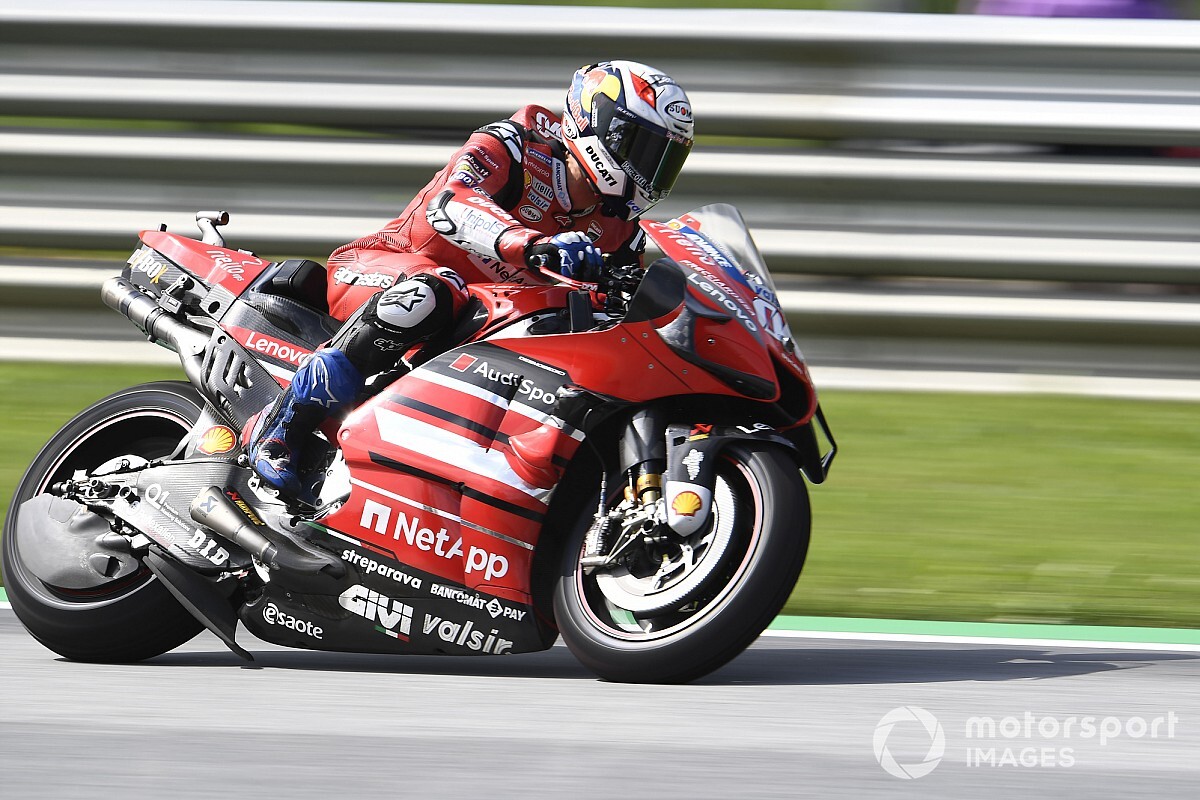 Andrea Dovizioso admits he currently doesn't have a "plan B" for his MotoGP future after deciding to quit Ducati at the end of the 2020 season.

It was announced on Saturday by Dovizioso's manager Simone Battistella that the 14-time MotoGP race winner would not be renewing his contract with Ducati beyond the current campaign, with Ducati confirming this soon after.

Dovizioso joined Ducati back in 2013 and won 13 races in that time, while also ending the last three seasons as the closest rival to Marc Marquez in the world championship.

The 2020 season has so far been tough for Dovizioso, with the new Michelin rear tyre causing him numerous issues on the 2020 Ducati, leaving him with just one podium from the first three rounds.

Speaking to the media on Saturday after qualifying fourth on the grid for the Austrian Grand Prix, Dovizioso says "in my mind is racing" as he looks towards 2021 - but currently has no plans.

"I want to race, but in this moment I don't have any 'plan B'," he said. "But that decision - this situation was different than to wait for the 'plan B'.

Dovizioso's options for 2021 are extremely limited, with only Aprilia outside of Ducati yet to firm up its full 2021 line-up.

When probed further about his decision to leave Ducati, Dovizioso refused to go into details as not to cause "tensions" within Ducati - but reiterated that he took it now to be able to concentrate on his racing.

"The only thing I can say is that it was better to take the decision now and be focused on the racing instead of waiting for more races [to decide]," he added.

"We're in Austria, a really good track for us and we showed very good speed today and yesterday.

"So, we want to bring the maximum in these two races. It was the right decision for us to take it now, and that's it.

"As you know, this situation and [it's important] to be relaxed within the team and be really focused for the championship."

When asked if his decision had cleared his head, Dovizioso added: "For sure this is some help because when you're thinking about how to be fast, how to be stronger and you think about a decision about your future, with the engineers, with the boss, you don't live in a perfect way when the speed is like [it has been in] the first three rounds.

"Now I'm just focused on racing and we are human so it's always better to be focused on one thing."

"That decision [to quit] is related about the situation there is in Ducati and it was to take a decision now and be focused on racing.

"I don't have any 'plan B', but in motorsport a lot of things can happen. The reality is at this moment a place doesn't really exist."