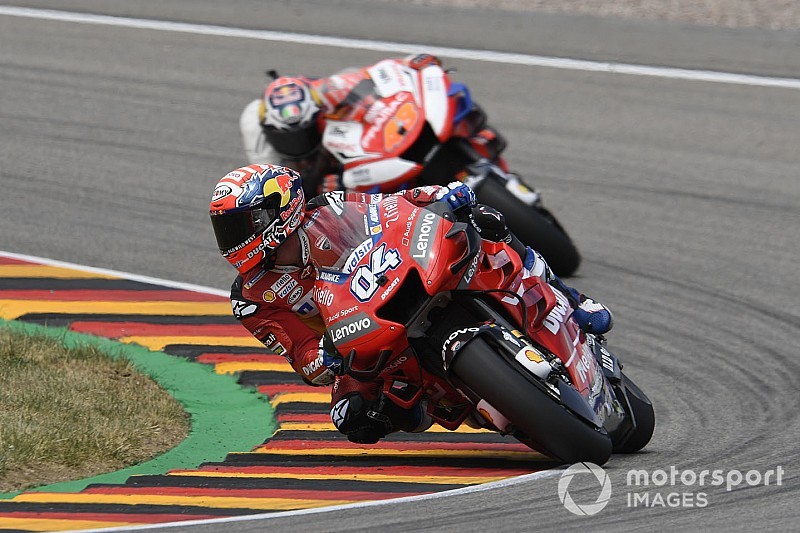 Ducati star Andrea Dovizioso has "lost his way" in recent MotoGP races, according to his former teammate Cal Crutchlow.

Dovizioso qualified only 13th for the German Grand Prix, and looks set to add more points to his already significant 44-point deficit to championship leader and Sachsenring pole-sitter Marc Marquez.

Dovizioso hasn't won a race since the Qatar season opener and also hasn't finished ahead of Marquez since - except for Austin, where Marquez had crashed out of the lead.

Crutchlow, who was teammates with Dovizioso in 2014, says that the Italian "lost his way" and he hasn't been able to take profit of the Ducati's strengths.

"I think Dovi lost his way and this is quite clear to see," said Crutchlow, who qualified sixth at the Sachsenring.

"I think that he is not riding as well as last year, I don't believe. But I don't know what is going on inside the garage, I don't know the bike he is riding.

"If you look at him two years ago, I think he was in a stronger moment than what he is now. I think Dovi is riding better when he doesn't think of the championship, when he goes for the race wins.

"In general, in the last races he has not been so fast in many of the practices and I think he's more lost the way and he is not using the bike's strengths.

"Dovi is a great and fantastic rider and good friend of mine but the tracks that he could have took advantage of Marc I think he's lost that opportunity. Now he's had some bad races, some bad qualifyings, I think it is getting a little bit worse for him."

Crutchlow, however, hopes that Dovizioso improves in the future so the fight for the championship can get closer.

"Hopefully he is able to get faster because we need the championship to be better than the points difference is at the moment.

"All credit to Marc, he is riding better this year than he ever rode."

Dovizioso expects a difficult race from 13th on the grid at the Sachsenring, as he doesn't have the pace of the frontrunners and also struggles with tyre consumption.

"We will see which strategy we can do but we don't have a lot of cards to use this moment," the Italian said.

"Our pace is difficult to understand because in the afternoon in the end we did with the soft used 22.4s. I don't think that is too bad if we compare the riders with the used tyre.

"The situation is difficult because we don't have any positive part of the race where we can be strong.

"If I lose a lot the rear tyre [durability] to recover a lot of position, I will pay [for] that. Everybody is struggling a lot with the consumption for the race but apart of that our speed in the middle of the corners is too slow and is difficult."

Nakagami felt like his bone was "breaking in every corner"