Dovizioso held back by neck problem in Mugello practice 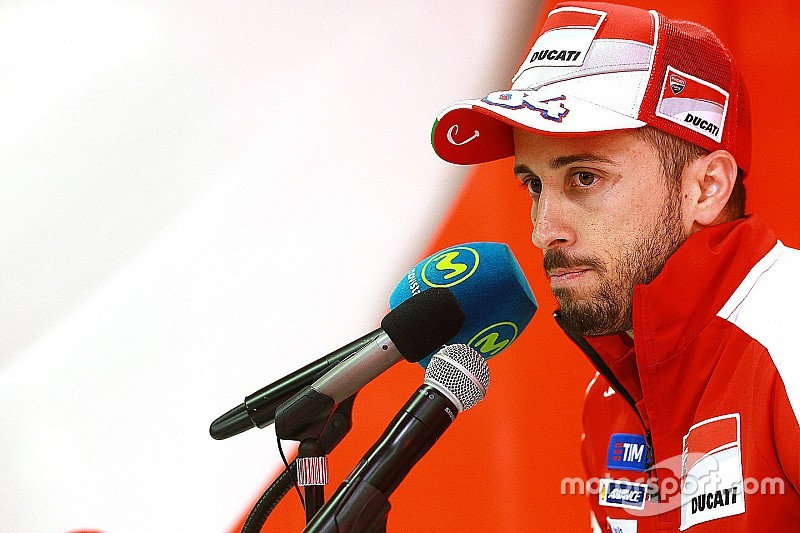 Andrea Dovizioso has revealed a long-standing neck injury held him back during Friday’s practice sessions for the Italian Grand Prix at Mugello.

In damp conditions during FP1, Dovizioso was one of a number of riders to not set any laptime, while in FP2 he could only manage 13th place, 1.1s off the pace of his session-topping teammate Andrea Iannone.

He explained that a neck injury sustained in a crash back in 2005, which flared up again, was the reason for his relative lack of pace.

“Unfortunately it wasn’t the best start today, because I had a problem with my neck,” Dovizioso told media on Friday.

“I’ve had this problem since 2005 when I crashed in 250cc. Sometimes it can happen, and this morning my neck blocked, which is a problem on the bike because I couldn’t turn my head back.

“We improved the situation in the afternoon and I was able to ride, not in the best way. Also I didn’t use a new tyre on the last run like most of the riders, so my position is not the best.”

Asked how many times the problem has recurred, Dovizioso added: “From 2005 I live with this problem every day, but fortunately this kind of limit has only happened six or seven times, not more.

"Normally when I crash is when it happens. The week after [the last race at] Le Mans it was a big problem, I did all the therapy.

"It's something you can't fix, it will probably always be like this."

Dovizioso said, however, that he has no concerns about the problem impacting his ability to race, as a similar issue at Mugello three years ago didn’t stop him from finishing fifth in that year’s grand prix.

“Every time it happens, I have never found something to fix it very quickly,” admitted the 30-year-old.

“It happened also in 2013 here on Friday morning when I crashed, but fortunately in the race I was in good condition to push.”