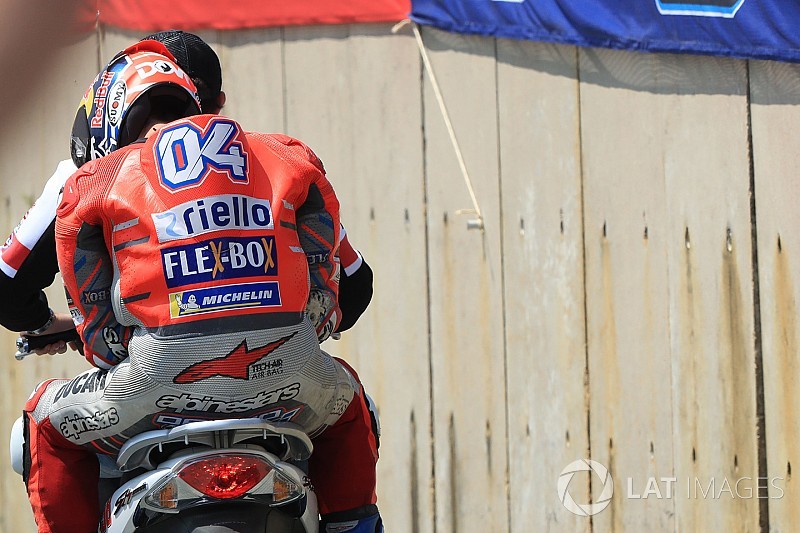 Andrea Dovizioso says mistakes like the one that caused him to crash out of the lead of MotoGP’s French Grand Prix are “unacceptable”.

The Ducati rider, who was caught up in a clash with teammate Jorge Lorenzo and Dani Pedrosa in the previous race at Jerez, had just taken the lead at Le Mans when he fell at the La Chapelle right-hander.

He is now 49 points off the championship lead, down in ninth in the standings.

Speaking to BT Sport about the crash, Dovizioso said: “I did a small mistake. This is unacceptable for me because if we want to fight for the championship against Marc [Marquez], we can’t do that.

“It is something pretty hard for me to accept because this is something in my career that normally I am not doing. It is very bad, I need minimum one day to pass this situation.”

Dovizioso said he “didn’t expect” to fall at that moment, because he felt he was riding within himself.

“We had a chance to win, at that moment I wasn’t pushing and my feeling was good,” he said. “The bike worked so well today, this weekend.

“That’s why I am really disappointed, because when the victory is in your hand and you make that mistake is unacceptable.”

Marquez, who leads the championship and took his third consecutive win of the season following Dovizioso’s crash, said his 2017 rival’s accident influenced the way he rode for the rest of the race.

“Honestly speaking, when Dovi crashed, the approach of the race was different,” he said. “Dovi’s pace was very good but he lost the front.

“Today was an important victory because it was a race track that normally we struggle a lot [at], and if we are competitive here, we can be competitive at all tracks.”