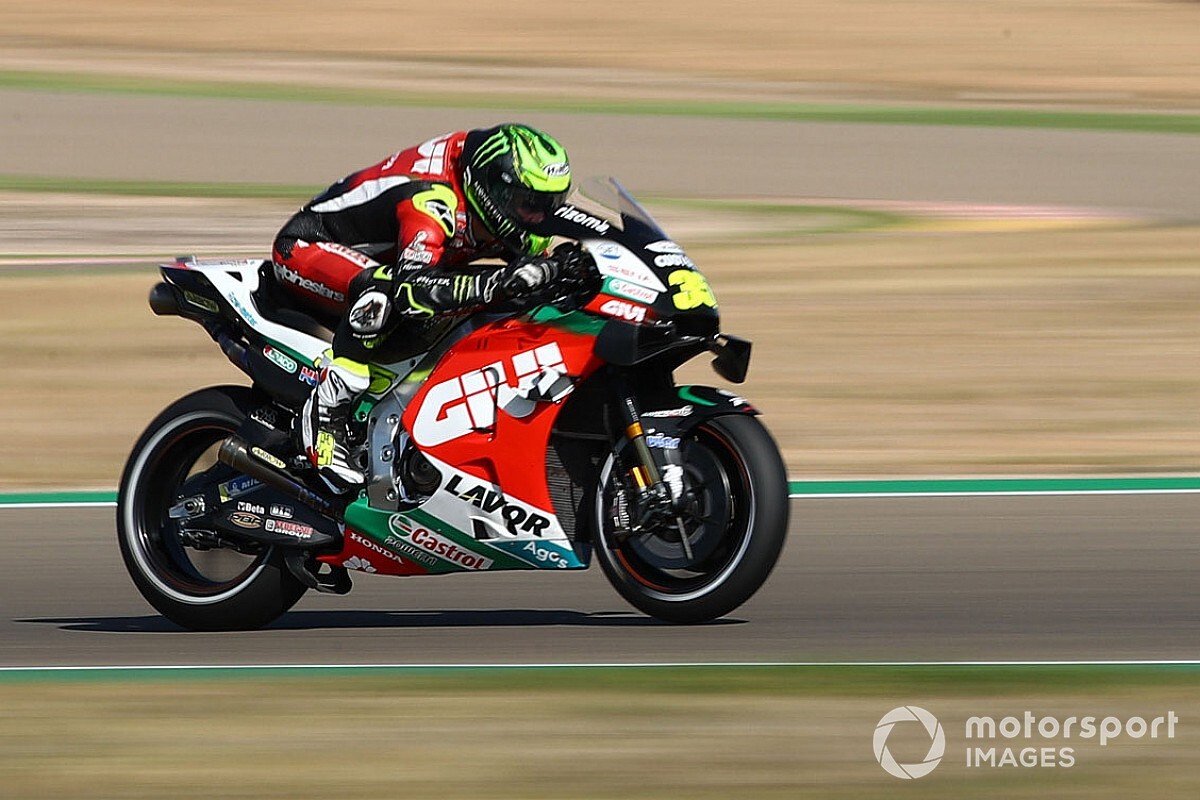 LCR’s Cal Crutchlow says a suspension update from Ohlins isn’t the “miracle cure that will make you win” on the Honda, despite qualifying third for the MotoGP Aragon Grand Prix.

The 2020 RC213V has proven to be a difficult bike, with rookie Alex Marquez on the factory team bike scoring the marque’s only podium so far last weekend in the wet Le Mans race.

Crutchlow guided his RC213V to a 1m47.305s on Saturday at Aragon to claim his first front row in MotoGP since last April’s US Grand Prix, while teammate Takaaki Nakagami was seventh and Marquez a career-best 11th.

The Honda riders have been running the updated Ohlins rear shock absorber first trialled at the Misano test in September, though Crutchlow is still unsure of its potential and feels the step in performance Honda riders have made is more down to “consistent riding”.

“I think it’s positive for some riders and not so much for others,” Crutchlow said of the suspension component. “I tried it last weekend at Le Mans and then I tried it again this weekend, what they found in the Misano test. But it also has its negatives. We aren’t really sure we will continue with or not continue with it.

“With the shock I’m not too sure [what’s missing]. The problem is I always use the shock on the not-so-good tyre, so I don't understand if the tyre is worse or the shock is worse. But with the new tyre it seems good. In the moment we are just analysing what we see on the data.

“Obviously, my comment is crucial as well so we need to sit down and discuss more. But I don't think there is night and day difference like everybody thinks. It’s not the miracle cure that will make you win or not win.

“I think the package we have anyway was good enough to be strong and we will look to see if we can improve that with shock or other things.”

Crutchlow’s season has been dogged by injury, with a broken wrist ruling him out of the Spanish GP before complications from arm pump surgery after Austria forced him out of the Misano double-header last month.

He was 10th on his return at Catalunya, and was set for a top six result last week at Le Mans having qualified fourth before crashing out late. Crutchlow admits his arm is still not 100% but feels his LCR team has “done a great job” since last week.

“First of all, it’s nice to be back on the front row; Texas was a long time ago,” he added. “My team has done a great job since Le Mans. Coming back after Barcelona my arm was not 100%. It’s still not 100%, but it’s recovered a little bit.

“In Le Mans I felt better and this weekend I’ve felt better again. So, it’s nice to get that front row after a good qualifying at Le Mans. It was a shame about the race because we could have had a good result, but we didn’t.”

Dovizioso: Using me for tow 'not a smart move' by Petrucci

Quartararo was “worried” to stand up after painful FP3 crash