Crutchlow fed up of Pedrosa's "ruthless moves" after crash 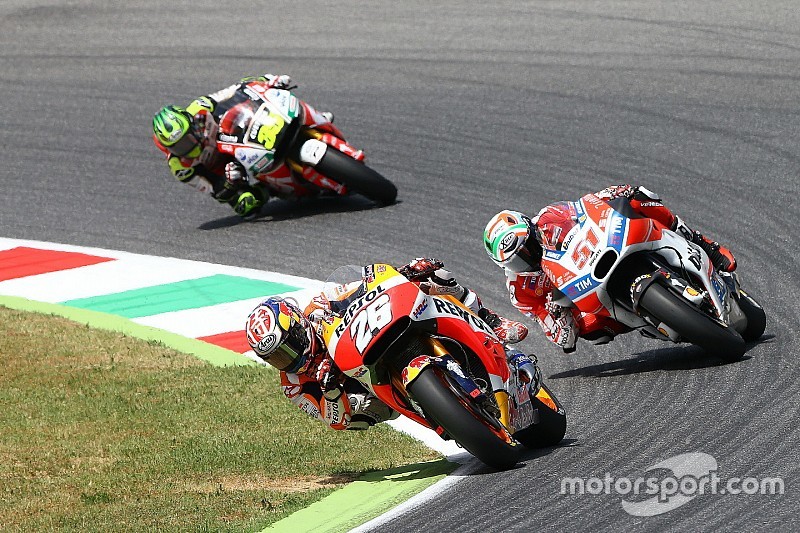 Cal Crutchlow hit out at fellow Honda rider Dani Pedrosa for their second collision in two MotoGP races at Mugello, which left both riders on the floor.

Crutchlow and Pedrosa were fighting over 11th on the final lap of the Italian Grand Prix before the pair collided at Scarperia, as Pedrosa lost the front end of his works Honda and collected Crutchlow’s LCR bike.

Crutchlow’s initial reaction to the clash was one of anger, especially as he had been on the receiving end of contact with Pedrosa last time out at Le Mans – although not crashing as a result.

“He came from a long way back because I couldn’t hear him, and then suddenly I saw him and I was on top of him,” Crutchlow told BT Sport. “Two weeks with his ruthless moves, and one ended in tears this weekend.

Speaking to the press afterwards, the Briton revealed he briefly dislocated his shoulder in the impact, but toned down his anger against Pedrosa.

“I'm alright, f**king shoulder popped out and then I couldn't breathe, that was my problem,” he said. “I just got winded. Obviously I had an impact on my ribs so they took me in the ambulance.

"But in the end, it's the way it is. There's nothing I can do now. I can't change the result by punching him [Pedrosa] or something like that. I've done it and I'm sure I will do it again in my career.

“Sometimes when you try to pass people, it doesn't work and that's it.

“I was obviously pissed off at the time but I understand that's just the way it is. I'm uninjured, he's uninjured and we can at least both go and race this [coming] weekend [at Barcelona].”

Pedrosa, who started sixth but dropped down the order in the early laps with a lack of grip, was apologetic about the incident with Crutchlow, admitting he had made an error by braking too late and too far off line.

“On the last lap, I was there in a group with Cal, we were both struggling and I had a lot of issues all race to control my bike,” explained Pedrosa.

“I tried to overtake but I made a mistake, I was too late on the brakes and too [far on the] inside without grip, and I lost the front. I didn’t push so hard, but I lost the front and took Cal out.

“A shame to not finish the race, also not to do a good race and also take him out, because it’s not a good feeling when you make this mistake and somebody else pays for it.”