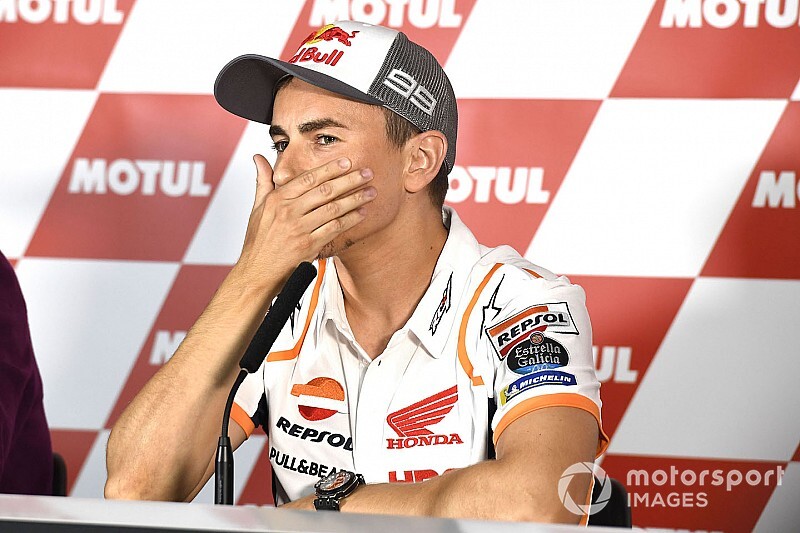 LCR Honda's Cal Crutchlow says Jorge Lorenzo's retirement is a "sad day" for MotoGP, after the five-time world champion decided to call time on his career on Thursday in Valencia.

A special press conference was announced on Thursday morning, with Lorenzo revealing that the Valencia Grand Prix would be his last, citing his recent injuries as a main factor in his decision.

Crutchlow – who is one of the realistic candidates to replace him along with LCR stand-in Johann Zarco – praised Lorenzo's career, highlighting that "a lot of people wouldn't even be in the same race" as him on his best days.

"The first thought should be [that] it's a sad day for our sport," Crutchlow responded when asked what Lorenzo's new means for his future.

"And sometimes even if you were on the podium you wouldn't even be in the same race as.

"So, he's been a great champion and the ultimate professional. I know his character is a little bit different to anyone else's, and even the riders see that.

"But you can't take away from him what he's done on the track, and it's more than what most have in this whole paddock."

Lorenzo's final season in MotoGP was an incredible struggle, as he failed to adapt to the RC213V and failed to score a top 10 result in the 14 races he has contested so far this year.

Despite this, Crutchlow believes Lorenzo would have "come good" on the Honda due to his "incredible" riding style.

"A lot of this has been built up by the journalists before it even started," he added. "I think he would have come good on the Honda; I don't know when.

"He knows how to ride a motorcycle. I still get to see his data now, and the way he brakes, the way he does things is incredible.

"I didn't know he was going to announced he will retire, and it's more of a sad day for our sport, I think."