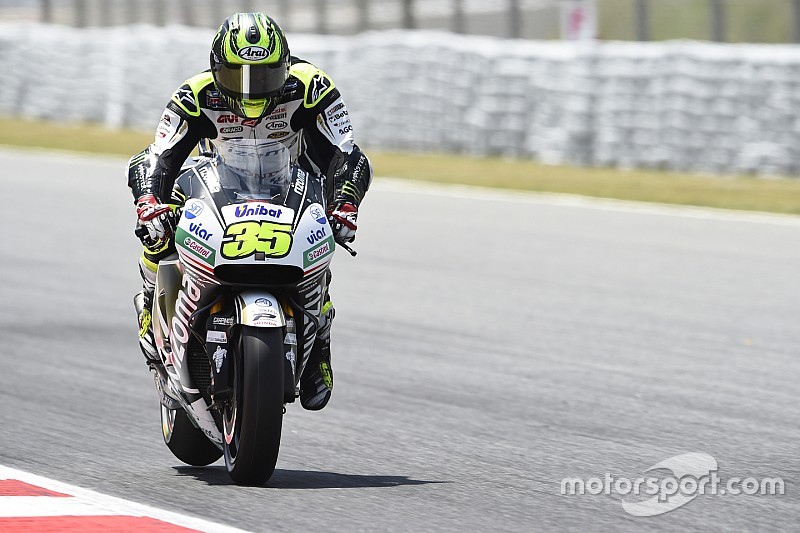 Cal Crutchlow says MotoGP's decision to change track layouts for the Catalan GP weekend has not specifically benefitted Honda, despite claims to the contrary.

After Luis Salom was killed in Moto2 practice on Friday in a crash at Turn 12, MotoGP organisers opted to adopt the Formula 1 layout for the rest of the weekend, featuring an added chicane in the final sector.

And while Marc Marquez blitzed the field to take his first pole at the track - and Dani Pedrosa took his first front row start of 2016 - Crutchlow thinks it's the riders that made the difference.

"The new layout for sure is not ideal, especially for a MotoGP bike in first gear," Crutchlow said. "It's tight, twisty.

"It doesn't suit the Honda like everybody thinks it does. It's just the riders are better than the rest."

Crutchlow also disagreed with the suggestion that the added corners were a gain for Honda by default, given the bike's infamous struggles with acceleration.

"Trying to get our bike around the corner, we need as few corners as possible - but we also need no straights," he quipped.

The LCR rider went on to say that Yamaha had every chance to challenge for victory tomorrow.

"I don't think Yamaha is struggling," he said. "I think Jorge [Lorenzo] takes maybe a bit more time than the other guys to push in this new sector.

"I think you'll see tomorrow that he has the pace to win the race - Marc also, Dani can be there also and Vale [Rossi]. I think [Yamaha] are struggling for a real laptime but consistently they're okay."

Crutchlow, who qualified in seventh, added that his satellite Honda was struggling for straight-line speed, costing him valuable tenths - and that he was puzzled as to why this was the case.

"The problem we're having is, our bike is so slow in the straights, it's incredible," Crutchlow lamented.

"Every single lap, I'm the slowest Honda down the straight into the first corner. I'm braking not as late as Marc but later than the other guys.

"I couldn't even slipstream Jack [Miller] in FP4 and I got a better run in the last corner. I don't know why, we have no idea, but our bike is slow.

"I'm losing two tenths to Dani, one and a half tenth to Marc every lap on the straight - you can imagine what we're losing to everyone else.

"But I'm happy with the way the bike's performing in the other parts of the circuit."

Third row start in Catalan GP for Iannone, eighth in qualifying at Montmelò