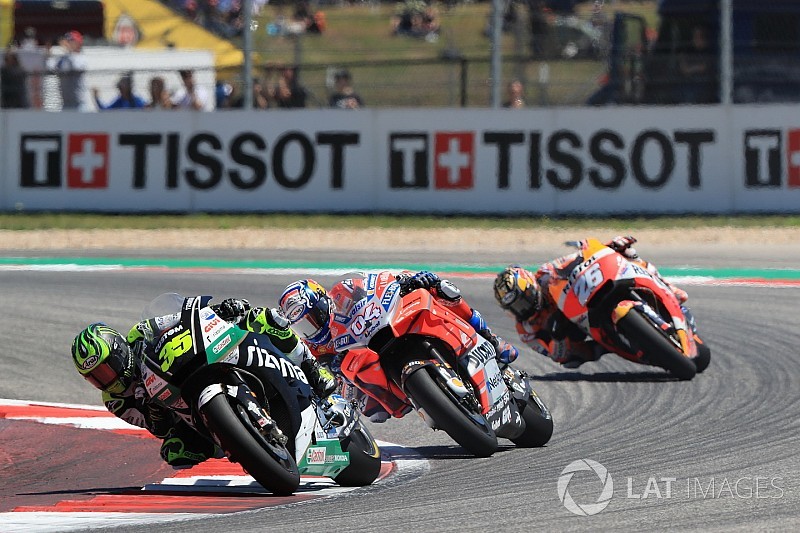 Cal Crutchlow has said he is no longer a "sixth-place rider" after crashing out of the Austin MotoGP race in pursuit of a podium finish.

The LCR Honda rider was running behind Johann Zarco's Tech 3 Yamaha in sixth when he lost the front and crashed at Turn 20 on lap eight.

He remounted and went on to finish out of the points in 19th place.

Explaining the incident, Crutchlow said he couldn't afford to spend anymore time behind Zarco as he was conscious of the bikes ahead getting away - and that he felt he had the pace to be second.

"I made a stupid mistake out the last corner," he admitted. "I was trying to square the bike to have a run at Johann into Turn 1, and as I leant at the last moment, I opened the throttle and closed the front.

"I'm a racer and you need to understand when someone's in front of you, and they're going slower than you can go, I'm not gonna ride round behind them.

"I needed to clear Zarco and go, because they were not extending their gap ahead of me so I knew I could go across quite easily.

"We have to take the positives to Jerez, that we're fast enough. I think it will suit me better, even though we should have finished second but we didn't because it was my fault."

The Briton acknowledged that not being in the points lead would help him to focus on aiming for the podium at every race.

He said: "I'm not saying I don't want to be championship leader, but in a way maybe it's better not to be, because then you can focus on being on the podium week in, week out, which I think we can be, instead of focussing on what the team wants, to finish fifth or sixth, to rack up points.

"If you chase podiums, the championship will come. In Qatar I finished fourth, but I was chasing the podium. In Argentina I won, I knew I could win.