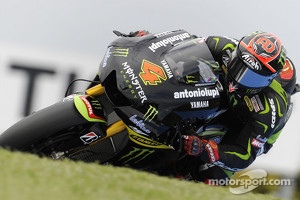 Officials declared the 30-lap encounter a wet race but new asphalt was already drying up when the action got underway in front of almost 62,000 fans. Crutchlow was one of four riders to opt to switch to slick tyres ahead of the start, which meant the British rider joined Dani Pedrosa, Álvaro Bautista and Nicky Hayden in starting from the pit lane.

Crutchlow's decision immediately paid off with a clear dry line appearing right from the opening lap. He brilliantly built up his pace and needed only five laps to surge from the back of the field into the top five. Crutchlow then moved into the top three on lap 13 and he found himself promoted into second position when Factory Yamaha rider and new World Champion Jorge Lorenzo crashed unhurt out of the lead on lap 14. The 27-year-old streaked away from Japanese replacement rider Katsuyuki Nakasuga, but just as he looked poised to score a career best second place and third rostrum of 2012, he crashed out on the approach to the final corner on lap 23.

Dovizioso's farewell appearance with the French-based Monster Yamaha Tech 3 Team ended with a sixth place finish, but the Italian was left to rue his decision to start the race on Bridgestone's rain tyres. With sections of the track still damp, Dovizioso seized the lead from Aleix Espargaró on lap three, but he quickly realised that he would need to pit and switch to his YZR-M1 fitted with slick tyres as track conditions continued to improve. Dovizioso switched to slick tyres as he was about to complete the fifth lap, which dropped him out of the top 15. He lost time in the pits when he stalled his YZR-M1 machine before embarking on a brilliant recovery to score his 15th top-six finish in 18 races.

Andrea Dovizioso - 6th "It is a pity that I could only finish my last race with the Monster Yamaha Tech 3 Team in sixth position. I'm sorry because I selected the worst strategy possible with the tyre choice and I'm disappointed. Normally I am always very strong at interpreting the conditions in the right way but this time I chose to start on the wet tyres and it was clearly the wrong decision. The other decision that compromised my race was I stayed out too long before coming in and changing to slicks. I didn't have a reference because I was in the lead but when I saw Jorge I understood it was already too late. But I still came in to change to slicks. I then stalled the bike, so I lost more time. I didn't give up and found a good rhythm so I get back into the top six which is at least decent finish."

Cal Crutchlow - DNF "Obviously I am very disappointed to finish the season like that. I wasn't sure whether to start on wet tyres but I saw Dani pit and just followed him. Going to slicks was obviously the right choice but although there was a dry line, in some places it was so narrow that you couldn't go off line to overtake because it was way too risky. Dani got through the pack quicker than me but once I got into a fast rhythm I felt really at ease. I had a comfortable lead over third and it was looking good for me to get my best MotoGP result when I hit the smallest wet patch going into the final corner. It just flicked the bike enough to throw me off the left side and I was actually lucky not to get tangled up with the bike. It is a shame because I wasn't pushing that hard, but in those conditions we saw loads of people getting caught out. But once again I showed I was really fast and we take a lot of positives from the second half of the season. I've been on the podium twice and in the last races I've been right in the battle for the podium. I'd like to have had a few more finishes but I've shown my potential this year and that I am good enough to fight with the best in the world. I can now look forward to 2013 with a lot of confidence."