© 2021 Motorsport Network. All rights reserved.
TV Tickets Fashion Giorgio Piola Jobs
Previous / All eyes on Austin as MotoGP touches down in the USA Next / Marquez takes the early advantage on day one in Austin
MotoGP Breaking news

Following 11 years in the premier class of motorcycle racing Colin Edwards has decided to call time on his MotoGP career with the Texan native announcing his decision at the official press conference ahead of Sunday’s Red Bull Grand Prix of the Americas in Austin, Texas.

I want to spend more time with my wife and my children.

Visibly emotional while making the announcement, Edwards spoke fondly of his time in the MotoGP paddock and revealed that his decision was made for a number of different reasons with his family at the top of this list while the pressures of having to adapt once again to new machinery has also played a part in the decision. He will however finish the remainder of this year’s championship.

“In testing this year I could see that I need to change my riding style and it is against my instinct to ride differently so that has had an affect. I want to spend more time with my wife and my children and of course I want to say thanks to Yamaha and everyone who has helped me in my career,” Edwards said to the assembled media as fellow riders, Marc Marquez, former teammate Valentino Rossi, compatriots Nicky Hayden and Josh Herrin and Bradley Smith all looked on. 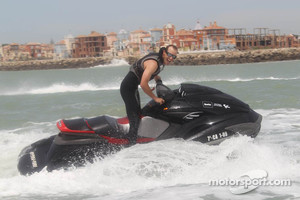 Colin Edwards, Monster Yamaha Tech 3 has fun in the water

Riding professionally for 22 years, Edwards joined the MotoGP paddock in 2003 with Aprilia and also spent one year on Honda machinery before joining what would become a long lasting affair with Yamaha. He has secured 12 podiums in this time and is also a double World Superbike Champion. Highly respected amongst all the MotoGP teams and management, Edwards also runs his own personalized bootcamp where riders and team members take part in some motocross training amongst other activities.

Following the announcement, the assembled riders spoke with fondness of the veteran rider with Rossi first to comment on Edwards’ decision saying, “I am very sad about the news of Colin's retirement as he is one of my best friends in the paddock. He is a great guy and a great rider. Marquez was also quick to comment and may have inadvertently reinforced the retirement decision when he revealed, “Colin started riding at the top when I was just two years old. I hope I can ride for as long as he has and I think he can be really proud of his career.” 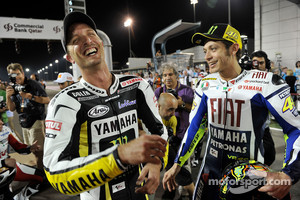 Hayden was sad to hear that his countryman is to retire but fully supports his decision. Hayden said, “I always look at Colin and admire the energy he has with so many miles and so many years behind him. It’s a shame to be losing a fellow American from the sport. I hope he takes it easy for the rest of the year and takes it easy on the rest of us!”
shares
comments

All eyes on Austin as MotoGP touches down in the USA

Marquez takes the early advantage on day one in Austin