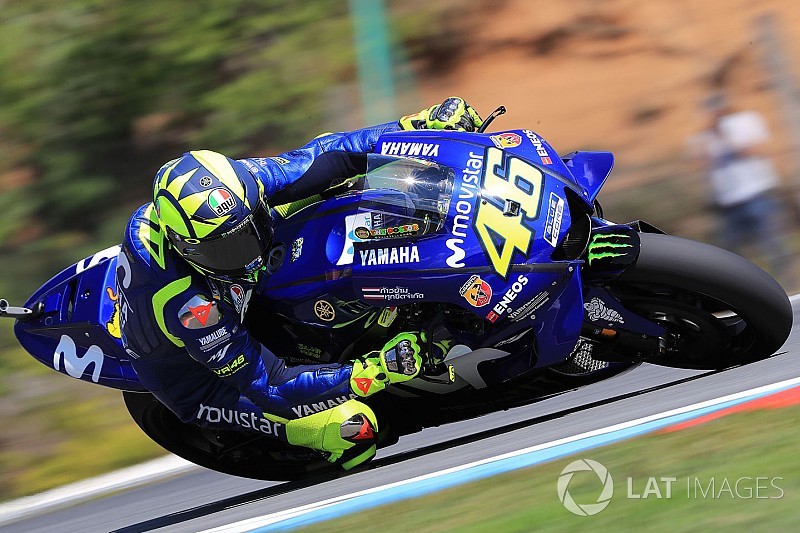 Rossi was in danger of having to take part in Q1 as he was only 11th when the chequered flag fell, but responded with a last-minute effort of 1m55.175s to end up on top.

Marquez quickly beat Dani Pedrosa’s Friday benchmark with a 1m55.637s at the start of the session, with LCR's Cal Crutchlow soon doing likewise moving up to second.

The Honda duo locking out the top two for most of the session, until Crutchlow edged out Marquez with 11 minutes remaining, which was followed by the Pramac Ducati of Danilo Petrucci going even quicker with a time of 1m55.369s.

Petrucci led for four minutes before his factory Ducati counterpart Jorge Lorenzo - sampling the new fairing first tried by Petrucci on Friday - moved ahead by 0.041s, but the Pramac rider fought back during the final minute.

However, Petrucci still had to settle for second thanks to Rossi's last-minute flyer, with Lorenzo also improving during the dying stages but staying third, ahead of Marquez.

Andrea Iannone was fifth in an otherwise disappointing session for Suzuki, as Alex Rins and wildcard Sylvain Guintoli were only 17th and 24th respectively.

Honda duo Pedrosa and Crutchlow were sixth and seventh, the latter ending the session with a crash at Turn 3.

Johann Zarco took eighth on the Tech 3 Yamaha, with Avintia Ducati’s Tito Rabat and the second factory GP18 of Andrea Dovizioso both making it to Q2 behind the Frenchman.

Vinales was best of the rest in 11th, missing out on the top 10 by 0.055s, followed by Aleix Espargaro's Aprilia.

Honda wildcard Stefan Bradl was 20th, 1.5s off the pace.

Takaaki Nakagami crashed at Turn 7 on the second LCR bike, while Tech 3's Hafizh Syahrin, who spent most of the session inside the top 10, fell at Turn 13 and ended up only 16th.